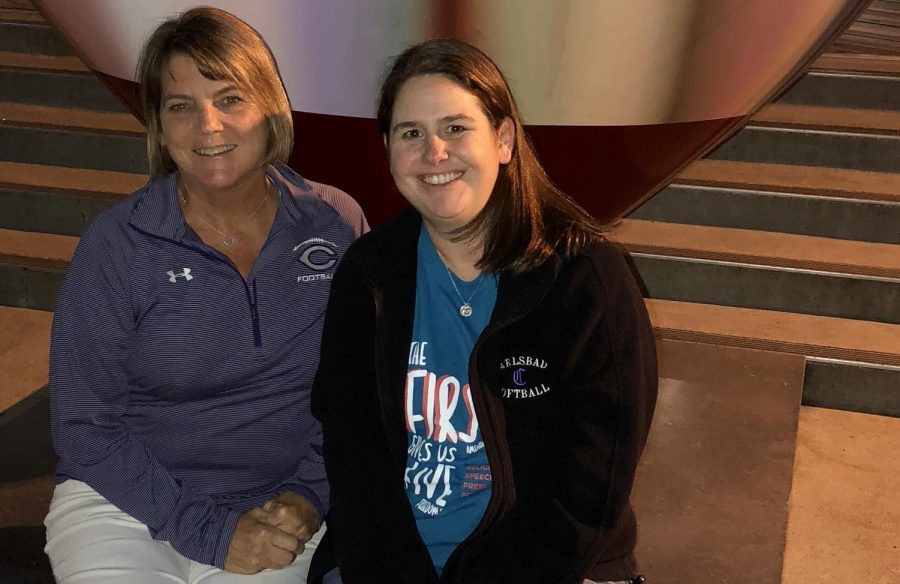 Mrs. Ryan and Mrs. Redfield are recognized by the district

Mrs. Ryan has been teaching at Carlsbad High School since 2001. She teaches yearbook, journalism and an intro-to-media class, which she added to her plate this year.

Mrs. Ryan attended UCSD where she majored in English, and moved on to earn her teaching credential in 2000. In this year, Mrs. Ryan served as a student teacher at Monroe Clark Middle School. Applying to several high schools around Southern California, CHS was her first and only interview. She was sold.

“I think my favorite part is getting to work with awesome students and making really great connections with them,” Mrs. Ryan said. “Because I’m the journalism adviser and yearbook adviser, I get to keep kids for multiple years and it really allows me to really build some good, strong relationships with students. I just love getting to hang out with them and also I love watching them create amazing product. There’s nothing better than seeing the yearbook come out and watching my kids guys pass out the magazines and watching them publish the newspaper that’s online. It’s really awesome.”

Dreaming of being a lawyer and going to Harvard, Mrs. Ryan quickly realized that was not the right profession for her. She does not like it when people argue, and hates conflict. Coming out of college with an English degree, Mrs. Ryan first began teaching English. However, she did not expect to turn into the journalism teacher.

“My 12th grade English teacher really inspired me to be a teacher,” Mrs. Ryan said. “She was just so awesome. I loved reading and I loved literature so I thought that would be a really good job because it’s fun and I really like working with high school kids.”

Her intro-to-media class consists of freshmen and sophomores with no experience in videography or writing (such as yearbook in middle school). The journalism class, which produces online content (The Lancer Link) as well as magazine issues (The Lancer Express), consists of all grades, as does her yearbook class (The Purple Shield). While Mrs. Ryan enjoys teaching her all three of her classes, she most connects with yearbook.

“I will tell you personally, I feel like I am better at yearbook,” Mrs. Ryan said. “Not that I’m not a good writing instructor, but when I took over yearbook there was something about it clicked with me. It comes more naturally and easily with me, but that doesn’t mean I like [those students] better. I feel that I am personally better at yearbook. If I was going to be in a class, it would probably be yearbook because I just get it better. But that doesn’t mean I don’t love all my students.”

Junior Catherine Allen, a member of the Lancer Link/Lancer Express staff, has noticed her improvement with her two years in this class, obtaining the Opinion Editor position this year.

“I have been saying yes to more opportunities and have been wanting to experience new things ever since I joined the class, and that’s because of Mrs. Ryan’s teaching,” Allen said. “And because of all the activities we do in class and her willingness to help us improve, I have definitely noticed progress with my writing and I am now more committed to continue improving.”

Mrs. Ryan is humbled and proud to be recognized as CUSD’s Teacher of the Year. She believes that the way she runs her class is how everyone should. She does not think she teaches any unordinary way, and she simply loves her job.

“I hope that I’ve taught them to think, to be creative, to work well as a team, and respect each other,” Mrs. Ryan said. “I think this is a really unique class and they really get to express themselves, write about and investigate things that they really love and I think that makes a difference.”

Mrs. Redfield has worked for the Carlsbad Unified School District since 2007. Though she has had a few different jobs in the administration office, she is currently one of CHS’s assistant principals.

Mrs. Redfield began as a guidance counselor at Valley Middle School, and later at Carlsbad Village Academy. She began her years as assistant principal at VMS, and finally settled here at CHS, currently in her eighth year.

Though she knows her title comes with the connotation of ‘disciplinary and strict,’ Mrs. Redfield views her work with high schoolers as helpful and guiding. She tries her best to help students become the best versions of themselves.

“I take [my job] more as a partner with the students and the staff,” Mrs. Redfield said. “I like to try and help guide the students so if they make poor choices, then I can help them guide their future decision-making and counsel them to be more successful with their life and help them deal with [any] issues. I like to keep more of a collaborative relationship with students.”

Senior Taylor Tibbels, who Mrs. Redfield has known since birth, has been greatly influenced by the assistant principal, and shares what she has learned.

“She has taught me to stand up for myself and to follow my dreams,” Tibbels said. “She impacted my middle school and high school years in such a positive way. She has always been there when I needed it and I am so thankful for her.”

Mrs. Redfield takes the time to attend students’ shows and games, showing how much she cares for every student on campus. Mrs. Redfield was nominated for her special relationship with her students as well as her ability to utilize all of her skills from past jobs for her current one.

Last year, CHS had a change in principals, and Mrs. Redfield took on the job as interim principal. Though now we have a permanent principal, Dr. Brian Brockett, Mrs. Redfield enjoyed her time as principal as well.

“I believe I was nominated because last year, when we had to transition from principalship, I was the intern principal here at Carlsbad High for a semester,” Mrs. Redfield said. “And I think just having that transition, the district recognized possibly that it was a smooth transition and we didn’t have too many hiccups as Mr. Brockett got in.”

“Her and I work very well together so it’s kind of cool that the two of us are being recognized in the same year,” Mrs. Redfield said. “We’ve developed a really nice relationship with the journalism and the yearbook program. We went to San Francisco last year, so it’s been really good. She’s a great peer, she’s a great person, she’s done a lot for this school so I’m honored to be alongside her.”