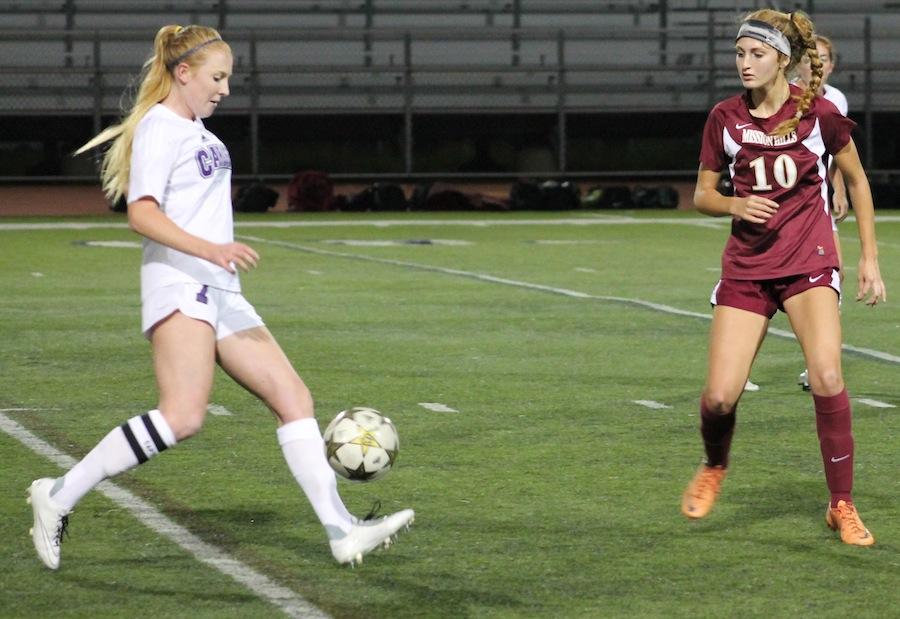 Senior Hannah Miller dribbles the ball down the field at the Carlsbad vs. Mission Hills game on Dec.4. The Lady Lancers won 4 to 1.

Girls varsity soccer hustles to start of the season

The girls varsity soccer team took on Mission Hills on the Carlsbad turf Thursday Dec. 4. The team started off the season with 2-0 win against Rancho Bernardo, Wednesday Dec. 3, which gave them momentum for another win of 4-1 for this game.

“We are starting off really strong” senior Summer Mason said. “We won our first two games and we only had one light practice on Tuesday the day before our games to get ourselves on the same page.”

The first goal was scored by sophomore Caitlin McCarthy, the second by senior Summer Mason, the third by senior Christina Nixon and the fourth again scored by Mason. Adoley Swaniker almost scored first half barely chipping the ball over the goal. Mason dominated the right side and took the corner kicks for the Lancers. Sophomore Caitlin McCarthy at midfield continuously battled for the ball, using her aggressiveness to set her apart. On the defensive end, Keogh leads on the field and is accountable to always win the ball in the midfield.

“Our biggest thing we focus on as a team is chemistry because no matter how skilled the players are you won’t have a good team unless you play together,” Mason said. “Individually all of us are looking to fine tune our skills and composure both on attack and defense.”

Their coach Carl Higham supports the team at games by constantly giving tips on the sidelines. The next game will be the upcoming Wednesday at the CHS stadium.

“We are picking up this season right where we left off last year and doing really well so far,” sophomore Erin Sinai said. “This year we are looking forward towards winning league again and the main goal is to win CIF.”

Whitney Drucker is a senior and editor for a&e in the Lancer Link. In her free time she likes to run cross-country, go horseback riding, and plays...