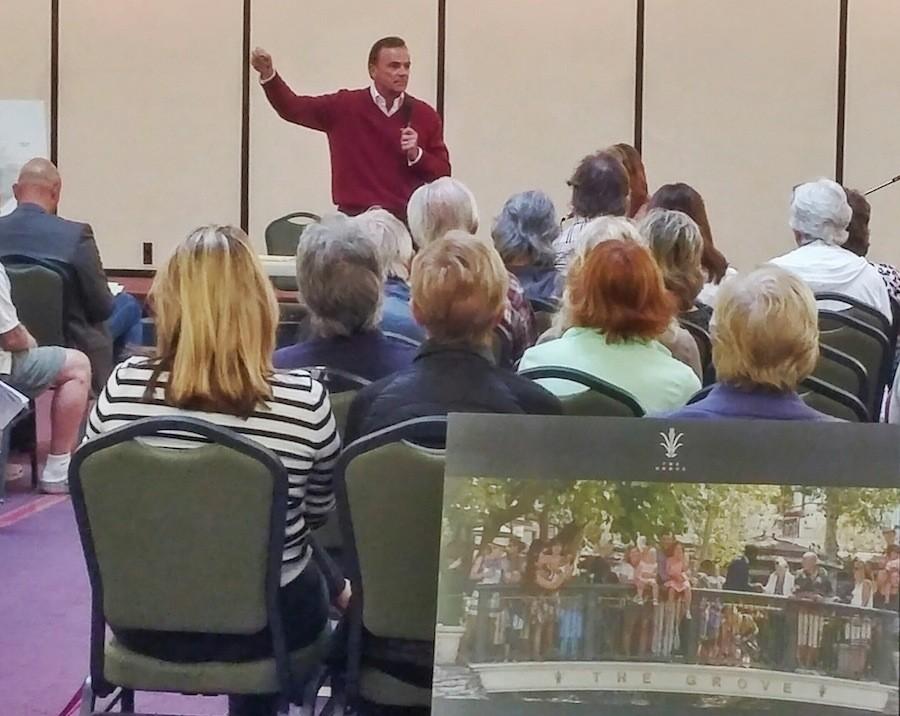 Rick Caruso addresses the community at St.Patricks church on Jan.21 on a heated debate about Prop A. The debate was an attempt to show both sides of the proposition to Carlsbad.

Over the course of the last three years, Caruso Affiliated and the Carlsbad Chamber of Commerce have concurred on the construction of an open air shopping and dining promenade–just fancy jargon for ‘mall’–on the northwestern wing of the local strawberry fields. The controversy of this project has become Carlsbad’s version of Watergate and gives its residents a reason to put up signs, make posters and paint their cars. But in this entire campaign of “yes” and “no”, few have wondered what Carlsbad’s present students and future voters have to say about this little conundrum. Well, here is an opinion:

The L.A.-based mall developer, Rick Caruso, had the courtesy of playing his pre-recorded cassette of promises in city council meetings and on our school’s television, swaying citizens and students in scripted speeches revolving around an agenda based on probability. To dumb it down, Measure A is as promising as your New Year’s resolution.

“You are voting on a law, a 400 page law that governs what I can do and what I require to do…but then, I have to go to the Coastal Commission before I do anything,” Caruso said at a CHSTV post-interview.

The Coastal Commission–whose approval will ultimately set the parameters for the project’s schema–is forbidden from conducting any research on the project’s viability since it was bypassed when the plan was put on public vote. In other words, Caruso cannot initiate construction without the approval of the Coastal Commission, which cannot conduct its research without Measure A’s approval. This Mexican standoff is largely attributed to our city’s governing body and their decision to approve such a measure without wanting to (initially) place it on the ballot.

When asked if this was the first time that the citizens of Carlsbad were not given the opportunity to vote on a major project introduced to our city’s council, Mayor Matt Hall said, “The answer is yes,” followed by a long comical pause and subsequent laughter from the audience. Hilarious.

Carlsbad’s governing body–who endorse the project’s financial promises since it will benefit the city and their pockets–has assigned Caruso’s own research agency to research the project’s viability. They  consider Measure A to be the best thing that has ever happened to Carlsbad since the invention of the wheel.

Before we jump right into the analytics, let’s clear something up about Measure A’s marketing. Caruso’s campaign uses phrases such as “Open Space the Right Way” and “Save our Strawberry Fields” which were both the underlying subjects of 2006’s vote on Proposition D.

The following are quotes from Prop. D:

In these three quotes lie the guarantee of the strawberry fields’ survival, the marking of trails and the prohibition of any commercial and industrial construction on that land. Malls fall under that “commercial” category. Measure A would repeal Prop. D and all the boundaries it has established thus bringing in new laws that Caruso Affiliated hid in that 400 paged bible.

Caruso has repeated that Prop. D allows the construction of amenities such as museums, aquariums or ice rinks on the area he wishes to construct his mall. If Carlsbad lacked anything other than malls, it would probably be ice rinks, aquariums and museums. Misinformation, as Caruso criticizes his opposition for spreading, is the key to his campaign.

“Open space” translates to “open mall” in Caruso’s language, evidenced by Caruso’s Affiliated own research that illustrates that this mall isn’t going to be a gentle giant, but rather an Ork straight out of Mordor. According to viability analysis conducted by Caruso Acquisition Co. LLC, 24.102 cars are predicted to drive in and out the mall’s parking lot daily–which will magically host all those cars without needing a second or third level–and 12.8 million visitors are projected to visit it annually (twice as many as LEGOLAND California Resort).

Taken from Carlsbad’s official webpage, these two images demonstrate a “before Measure A” and an “after Measure A.” The image below illustrates the current state of the land with the area highlighted in yellow being the strawberry fields. 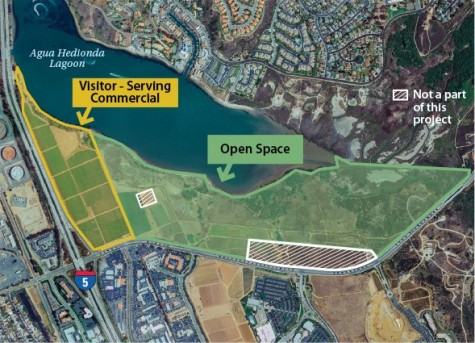 The image below demonstrates the condition of the strawberry fields after measure A has taken effect. The area highlighted in yellow is the land that the proposed mall would take over and yes, those fields under yellow are indeed our strawberry fields. Jimmy Ukegawa, the owner of the strawberry fields, has the option of continuing his reaping along Cannon road moving east, although the soil is infertile and not cultivated, which means more money and trouble for the growers. Ukewaga will be fine though, there is a lot of green that sprouts from Caruso’s pockets anyways. 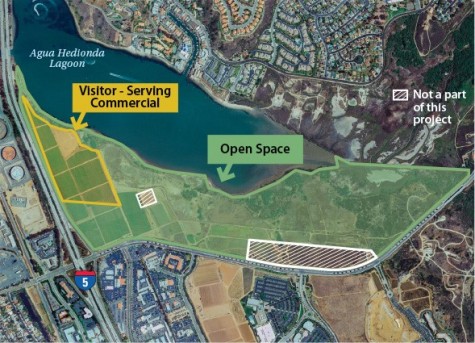 Selling a mall under catchphrases such as “save the strawberry fields” and “open space the right way” simply makes you a crook. If Caruso and the Carlsbad Chamber of Commerce weren’t afraid that such a measure would fall flat on our stomping feet, then why didn’t they promote it for what it really is? Why bypass CEQA? Why would Caruso bring along Ukegawa in every one of his speeches if not for the purpose of having a familiar face for Carlsbadians to trust and listen while he repeats his monotone line of: “If measure A does not pass, the strawberry fields will be gone.” If Measure A passes, more than half of his property will be gone. Why are we not told the complete truth?

Alternative uses for the land are not being discussed although ideas should really be suggested. After all, something will be eventually built on that yellow zone.

“What I’d like to see is a local market, tie it into the farms there and teach kids about organic farming,” Citizens for North County member Chris Murnane said. “My vision of the land is to build something that its zoned for, build something to benefit us, the people of the community.”

Caruso wants to get the facts out. Here they are:

In the midst of all this, Carlsbad Villages’ store owners believe that they will benefit from a competitor who houses famous brands while some Carlsbadians still think of Measure A as the strawberry field’s lone salvation. Traffic will allegedly improve–under measure A–and after extensive, month-long, street-widening construction on one of the I-5’s narrowest parts. Agua Hedionda Lagoon will apparently not suffer from careless visitors’ trash and miles of trails will decompose the lagoon’s virgin landscape. Our Mayor jokes his way around public hearings while he and his council insist that this plan is “the right thing to do for Carlsbad.” The police department enjoys its increased salary and philanthropist Rick Caruso happily sacrifices over $7 million in campaigns because he cares for our people.

Other than that, life is rad in Carlsbad.

View Comments (21)
About the Contributors 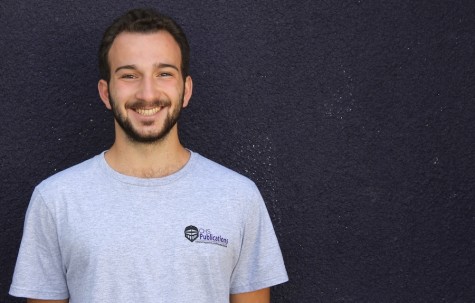 Socrates Kanetakis, Podcast Editor
Socrates Kanetakis recently moved from his country, Greece. He is the podcast editor and also the movie reviews' editor. In his free time he enjoys philosophizing, solving geometry problems, stroking his beard and eating gyro. He also enjoys canoeing on the weekends.

Socrates Kanetakis, Podcast Editor
Socrates Kanetakis recently moved from his country, Greece. He is the podcast editor and also the movie reviews' editor. In his free time he enjoys philosophizing, solving geometry problems, stroking his beard and eating gyro. He also enjoys canoeing on the weekends.