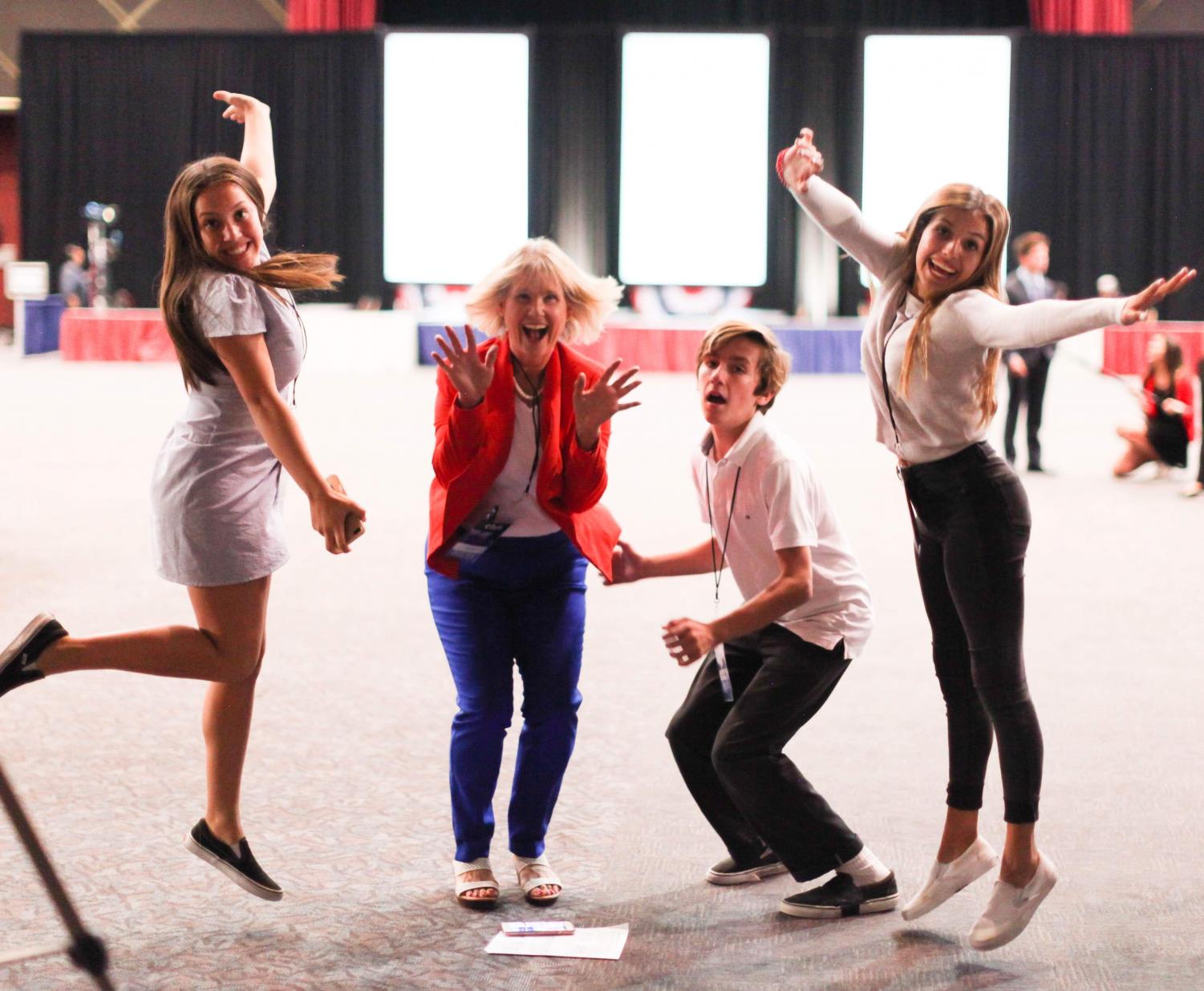 CHSTV production assistant Terri Leon poses with CHSTV students at Golden Hall in San Diego for the 2018 election on Nov. 6.

CHSTV’s production assistant retires after 20 years on the job

CHSTV’s period two class first heard the news on Tuesday, Jan. 28. CHSTV Production Assistant Terri Leon would be retiring. After about 20 years of teaching and building relationships with broadcast journalism students, Leon would be leaving that Friday, just two days away.

Having turned 70 years old on Jan. 30, Leon knew this milestone signaled a time for change in her life. She once was a tutor at Calavera Hills Middle School, and wasn’t involved in journalism before joining CHSTV. By now her job is second nature, as she takes notes of rehearsal broadcasts and coaches the student anchors, focusing on improving the award-winning program one class at a time. To master the job, Leon says it demanded a hands-on learning approach. Reflecting on her experience, Leon recalls her favorite part: the kids.

“They come in when they’re ninth graders and they leave when they’re in 12th grade, and I watch them grow up in front of my eyes,” Leon said. “It’s so fun to see them blossom. Every year they learn new things and they just amaze me every day.”

Leon spent her last week here training her replacement, Kristen Cohn, who has worked in the Carlsbad Unified School District for 11 years as a librarian media technician and instructional assistant. Leon has passed the lessons she’s learned onto Cohn.

I watch them grow up in front of my eyes.”

“Probably the biggest thing is that everything leads to everything,” Leon said. “That’s what Mr. Green keeps saying and it’s so true. The students, everything they do, leads to something else; it turns into something else. It’s an opportunity. [I’ve learned] never to take anything really seriously [and] just do your best.”

Cohn, amazed by the program and its mentors, Green and Leon, saw this job opening as a great opportunity. Being trained by Leon during CHSTV classes, Cohn has seen the motto “everything leads to everything” play out in action.

“It’s an amazing program,” Cohn said. “[Green and Leon are] amazing mentors and teachers. I was blown away by everything that these students can do, and do every day.”

One such CHSTV student is sophomore Lilli O’Connell, who knows Cohn from her time at Buena Vista Elementary and Valley Middle School. Through school days and Student Television Network (STN) conventions, O’Connell has experienced firsthand the dedicated involvement Leon brought to the program, and she now takes on the change with excitement.

“Mrs. Leon has kind of been like a second mom for the past five years of my life,” O’Connell said. “Always walking in and seeing her smile, it’s going to be different to not see her every day but I mean, change always happens, and I’m excited for her retirement so she can have fun.”