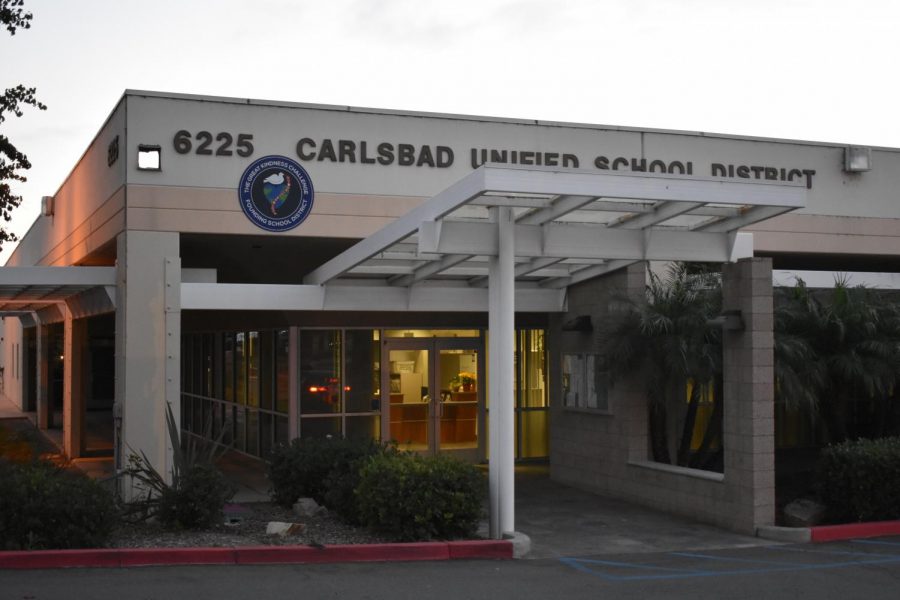 The Carlsbad Unified School District Board of Trustees convenes at the CUSD office. These meetings typically occur on the second Tuesday of each month.

Inside the CUSD Area 1 school board race

While less publicized than other races, the election of school board members is crucial to the community. The school board is involved in all the important aspects of local public education such as curriculum, budget, and management. Board seats in Carlsbad Unified School District are divided into different areas, with the Village and Old Carlsbad lying in Area 1. Veronica Williams has held this seat since 2010 and is up for re-election. She is being challenged by Dr. Melanie Burkholder, a member of the Magnolia Elementary PTA. The election will be held on Nov. 6.

Veronica Williams, the incumbent, has sat on the school board for eight years. She has a background in mathematics and computer science and is currently the chief technology officer for a research company. In addition to her career, she has two sons with the district who attend CHS.

During her two terms on the board, Williams says her priorities have been safety, student success, and saving taxpayers money. Safety, a relevant issue for many voters due to many recent high-profile school shootings, is very important to Williams.

Williams also emphasizes student success. She believes in the importance of preparing students for life beyond high school. This goal ties in with her career and her work on the board.

“One thing my business does is look at the workforce and the economy,” Williams said. That’s another strong priority that I have, making sure that we are preparing students for the future world of work. I was looking at our career pathways and making sure they are relevant because of job volatility, since many jobs are going to be automated in the future. I’m always looking ahead and saying ‘Is that job going to be there in the future? Are we preparing our kids for the actual world of work?’ “

Lastly, Williams says she wants to save taxpayers money.

“Saving taxpayers [money] is one of my top three priorities and to make sure we are investing money wisely, looking at every dollar,” Williams said. “Since we are one of the least funded [districts] in San Diego County, we’ve been really good since I’ve been on the board of using our money wisely, of using less, of doing more with less.“

Williams believes she has helped the board achieve all these goals and wants to help continue them. She has stressed her experience and these achievements in her campaign. Along with the aforementioned priorities, during her tenure on the board, the district opened Sage Creek High School on time and under budget, saved taxpayers $11 million, increased graduation rates to 94 percent and received recognition on the College Board’s AP Honor Roll three times, according to Williams.

“I’m trying to continue a record of success,” WIlliams said. “We are on that trajectory. You want someone with a proven track record to be on the school board.”

Dr. Melanie Burkholder, the challenger, says she wants to bring a new perspective to the school board. She was a Secret Service agent before becoming a therapist in Carlsbad. She also has two sons who attend Magnolia Elementary, where she is a member of the PTA.

Dr. Burkholder became involved in local education as a part of the fight to ban the use of Roundup on school fields. In addition to that cause, she has also been involved with sun protection education and the push to replace lead pipes at Magnolia. These efforts helped motivate her to run for the school board.

“Those are three environmental pieces that I think are really important that inspired me,” Dr. Burkholder said. “Kids need advocates and they need people to help them be protected.”

Kids need advocates and they need people to help them be protected.”

Like Williams, Dr. Burkholder believes safety is a top priority. In her campaign, she emphasizes her background in security.

“I’m not a ‘my way or the highway’ type of person but I have a unique set of skills that can be brought to the table,” Dr. Burkholder said. “I think it’s a motivating thing for the people of Carlsbad to understand that I do have their safety at heart.”

Along with safety, Dr. Burkholder has made budgeting a large part of her platform. She identifies herself as a fiscal conservative and says she wants to pay close attention to the finances of the district.

“I think it is very important when you are asking stakeholders for $265 million that you spend our money wisely,” Dr. Burkholder said. “I’m a homeowner and a taxpayer as well so I definitely want my dollars to be spent for good things… For example when you think about technological advances, what can we use that money for that will help security but not be obsolete in the next five to ten years.”

As a parent, Dr. Burkholder also has goals in mind that reflect her experiences with the district. One example is broadcasting school board meetings. She feels that the current process is inaccessible to most parents because the meetings are on a school night and the only other way to access the information is through Soundcloud.

“I want to focus on transparency and accountability and getting our information out there because parents want to know what’s going on,” Dr. Burkholder said. “We want the information, we want to be involved but we can’t just drop everything and be at a board meeting.”

Another issue Dr. Burkholder wants to focus on is special education. As a therapist, she feels a personal connection to that subject and wants to work on improving it.

“I thought ‘Wouldn’t it be great if we had advocate for those people who could help navigate the waters for parents who have high functioning kids?’ If you couple that with parents of low functioning special needs individuals it’s hard for them too. It’s hard for them to get the things that they need… It hurts me to see them struggling. I’m a mental health therapist by trade, that’s what I do.”

Overall, Dr. Burkholder has emphasized her background in her campaign. She believes her experience in security, mental health and local activism qualify her for this office.

“My personal background, training, and experiences are different than anyone elses on the board,” Burkholder said. “I don’t want to change the colors of the schools or anything like that I  just think that changes in the schools are reflective of election cycles. I have a very unique background that is completely different from anyone elses on the board and I think that is a good thing to have.”