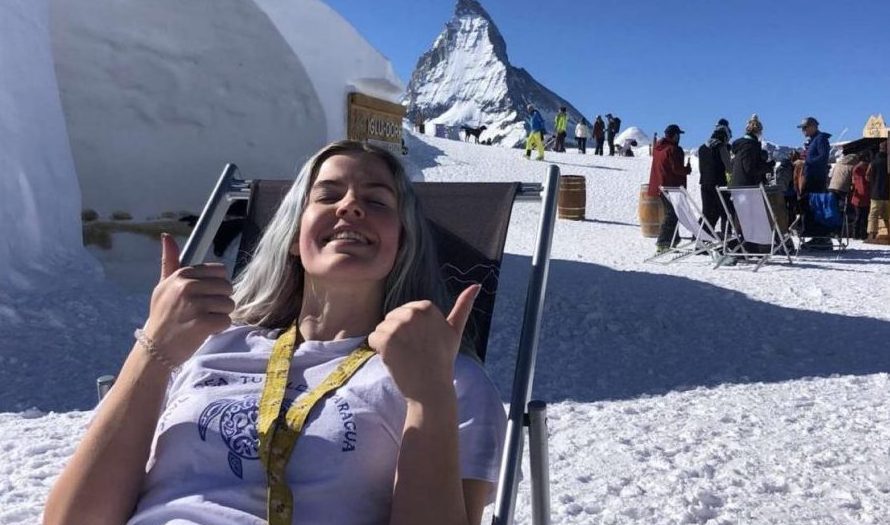 Senior Jamie Morgan poses for a photo in Switzerland while visiting her family. (Photo courtesy of Jamie Morgan)

Senior Jamie Morgan poses for a photo in Switzerland while visiting her family.

Taking a quick trip across the world

Prior to the recent ban on international air travel due to COVID-19, senior Jamie Morgan made her way to Switzerland and got the opportunity to dive into the culture and experiences. Her short trip was planned months in advance, but a recent travel of a family member caused her to bump up her trip.

“I actually went because my cousin lives there and he goes to school at Franklin University in Lugano so it’s like the Italian part of Switzerland,” Morgan said. “So I got to see the college lifestyle and live with him and some friends. I technically had a hotel, but half the time I was staying in random places … I was originally going to go during spring break, but then my uncle was going to be there for three days so I was with my uncle and my cousin for three days, so I didn’t have to stay in a hostile or anything.”

Her adventures took her all around Switzerland, visiting famous attractions most never get to see. Learning about foreign social norms, Morgan was able to compare the lifestyles of Switzerland and San Diego.

“We went up to Zurich for one night before taking the Glacier Express to Zermatt, which is where the Matterhorn is, and then we stayed three nights in Zermatt and I went snowboarding,” Morgan said. “It was super fun. Switzerland is really cool, but it is also expensive. Everything there is ridiculously overpriced for whatever reason.”

Her travel journey to get out of Switzerland was an adventure within itself amid the COVID-19 outbreak. Traveling alone, Morgan had to manage her time and coordinate her transportation to ensure she made it back to San Diego.

“We took the train back to Zurich and I was actually supposed to fly back out of Milan, but the coronavirus outbreak made it so I had to fly out of Zurich,” Morgan said. “So I flew first to JFK and then all the way to Milan. I pretty much left at 7 a.m. and landed at 7 a.m. Then going back, since I switched my flight, I had a really stressful layover. I was flying from Zurich to Amsterdam to LAX to San Diego, because I couldn’t find any direct flight back to San Diego. So going from Zurich to Amsterdam to make that flight, I had exactly one hour. Then my flight was delayed 30 minutes and so my parents were already looking at different flights I could take later that day, but we made up time in the air and then through passport control they had a quick connection lane.”

I got to see the college lifestyle.”

Even though the stress of connecting flights and cancelled travel plans occurred, Morgan still was able to highlight her favorite part of the trip and add a memory to her senior year.

“My favorite part was honestly the cappuccinos; they were so good there,” Morgan said. “Especially in Lugano since it’s the Italian part. Right across the street from our friend’s dorm building was a little store, kind of like a gas station and there was a guy who worked there, Roberto. I tried to speak spanish to him because he was Italian, but he spoke some spanish too. I would come in and get cappuccinos like five times a day. Half the time they were free because he would just let me pay next time. It was like six dollars for one, which is pretty expensive. There was an espresso machine everywhere we went. You just do it and make it yourself and then you pay, at every grocery store or restaurant. I wish we had more of that over here.”

Alyssa Miller, Features Editor
Alyssa Miller is a third year journalism student and the features editor for Lancer Link. She enjoys writing and learning information about the school and is extremely excited to spend her last year at CHS on the journalism staff.