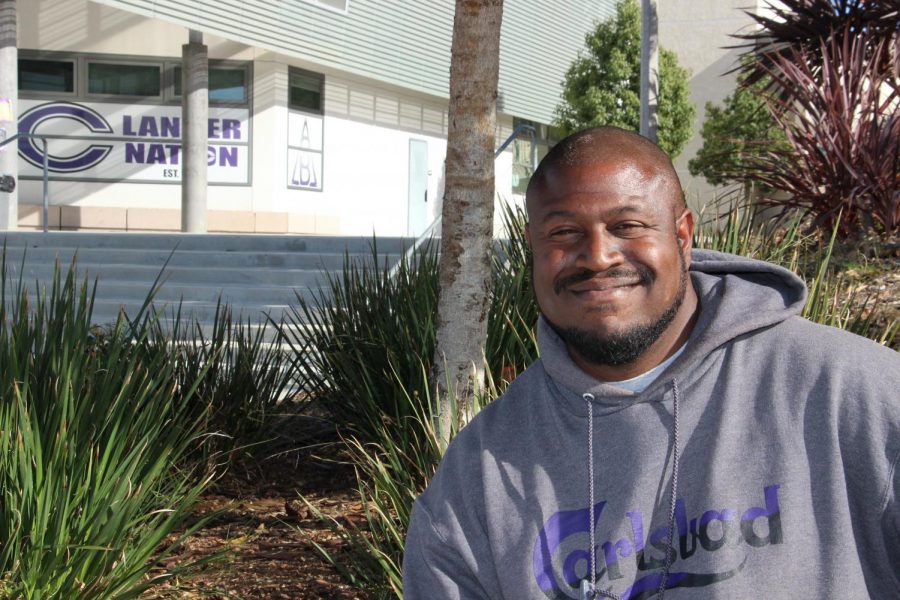 Custodian Randy Austin helps to keep our campus clean and bring a smile to students’ faces.

Randy Austin is one of the few custodians around campus. Unlike the security guards, enforcing the rules is not in his job description. However, he does make it his job to guide students on their path and give them insight on advice he wishes he knew in high school.

Since Austin graduated from Oceanside High School in 1995, he has led an interesting life that most students might not expect.

“From there to here man, it’s been crazy,” Austin said. “I’ve done a lot of things. I’ve seen a lot of stuff. So this is kind of like the ending for me. The settle down of all the hoopla and all the uproar.”

Shortly after high school, Austin started working as a set decorator with a group of his close friends. They would spend 14 to 16 hours a day on commercial and television sets. Austin explains how his crew worked closely with the directors to transform their filming locations.

“The director would come in after we’d set up,” Austin said. “And be like ‘oh I don’t like this, we’re gonna shoot from this angle, we’re gonna do this, that, and the other, we need this, we need that, I need you to move this or do that.’ Whatever he wants you to do that’s [what] we do. And then they’ll come in. They’ll shoot, wrap up. They’ll call us back and we’ll dismantle everything and put it back the way it was when we first got there. You would never know we were here.”

After nine years of working as a set decorator, Austin has now been a custodian at Carlsbad High School for five years. Apart from a few “knuckleheads,” he gets along great with the students. He even stays in touch with some alumni through social media.

“You guys make my day,” Austin said. “The whole reason why I’m here doing what I’m doing is because of you guys. If you guys weren’t here, I wouldn’t have a job. Think about it, everything that’s around here that is clean, it’s because of you guys, not because of me. It’s because I want to make sure that it’s done for you. So you guys don’t have to worry about that. You can come to school, do what you’re supposed to, and go home. You leave the rest of that stuff to us.”

Austin is at school all day and stays after hours for football games and other events. So during the many hours he spends around the students, he has witnessed a few moments that have changed his outlook on life.

“I’ve had a couple of things that actually shook me up a little bit,” Austin said. “We’ve had a couple of incidents where we’ve had some kids that were dealing with alcohol. There were a couple of life-changing events that happened that made me want to communicate with my kids more. Be on that same page. Give them that platform so they can speak.”

Although high schoolers are on the brink of adulthood, we’re still used to being treated like kids. In this respect, Austin is noticeably different than many other grown ups.

“I’m not like every parent or adult,” Austin said. “I don’t treat you guys like that. You guys are transitioning into young adults and that’s how you guys want to be treated. I want you to be treated the same way I want to be treated. With respect, dignity. So if anytime you see me and I’m approaching somebody it’s not out of anger or out of malice, I’m just trying to let you know, look things can happen, you just gotta make it happen.”

Austin does not avoid the hard conversations. It would be much easier for him to tell students that everything will work out for them, but he values the truth because he knows it will be more helpful in the long run.

“I don’t like to candy coat,” Austin said. “I have four kids of my own and I will not candy coat anything. I’m going to be brutally honest with them. If they don’t like it, oh well, that’s just the way the world is.”

Austin may be brutally honest about life, but he manages to have a positive outlook on everything he does. He explains that he has some regrets but claims that he would not have it any other way. The lessons he has learned are turned into words of advice for the students.

“I’m forty years old now and if I had known what I know now back then, I wouldn’t be here,” Austin said. “I would have saved all that money I had. I would have done something else, but I didn’t. I learned my lesson, and that’s why I preach to you guys everyday to follow your dreams, do what you need to do, focus, and go that right way.”