Enforcing justice in the NFL 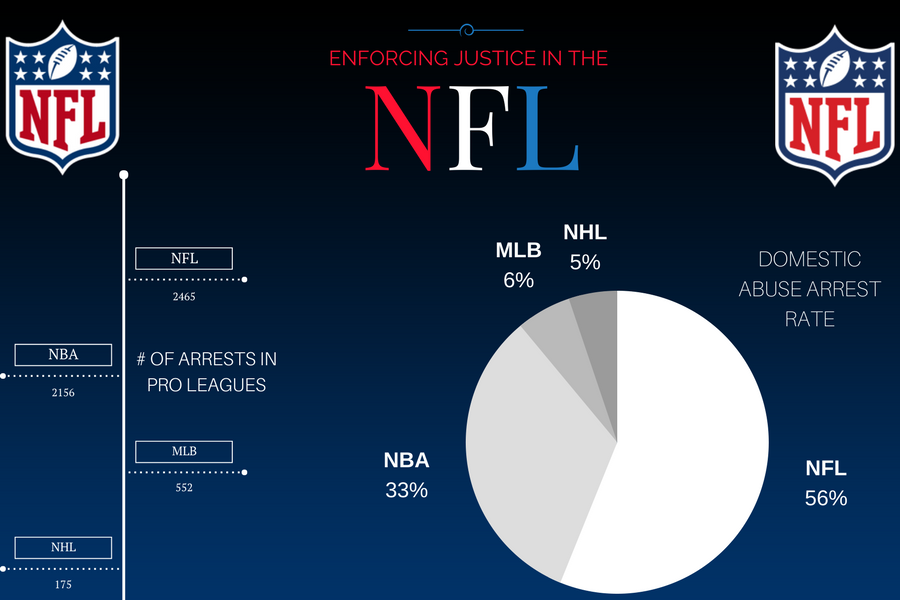 Professional athletes have been fighting for both social justice and criminal justice, rapidly capturing the attention of the press, as well as the general public. With kneeling during the national anthem and contributing to criminal justice legislative reform, their well-known actions have proven that professional sports give people a major platform for causing change. Yet, when professional athletes’ actions consist of committing sickening crimes and violating basic human rights, the athletic world seems to turn a blind eye. Currently, athletes are passionately defended by their management until finally proven guilty, then, they receive practically just a slap on the wrist for their horrendous acts.

The National Football League holds the majority of accused athletes, as arrests for domestic violence rates are higher in this league than in any other professional league. The NFL’s response to legitimate accusations have continuously been to suspend the athlete until a decision has been made in court. However, the majority of these decisions are never even finalized, as the verdict is left — conveniently — “undetermined.”

We need sexual assault to end, but we cannot achieve this if our country does not adequately enforce its guidelines in all aspects of society.”

Furthermore, when an athlete is actually found guilty, many times it results in the mere end of their professional career. Even when sentenced, they do not receive the just punishment pertaining to these crimes. Why is it that when “average” people commit sexually violent crimes, a clear verdict is found and they are put away behind bars with no exceptions? Yet, when these “stars” do so, they get off relatively easy.

Americans all over the country idolize professional athletes, implying that these people ought to be inspirational and able to make a positive influence on those who cheer them on. I mean, if our criminal justice system allows for giving professional athletes special treatment, they must be truly just people who rarely make mistakes, right?

No matter how much talent a person conveys to the public, they are still a person living under U.S. law. We need sexual assault to end, but we cannot achieve this if our country does not adequately enforce its guidelines in all aspects of society. Meanwhile, the leniency given to athletes is completely counterproductive, as these are the people who are idolized and celebrated by the majority of Americans. Thus, an extremely effective way to enforce justice in our country is by holding professional athletes to the same standard as the rest of Americans.