Film academy adds another year to the program 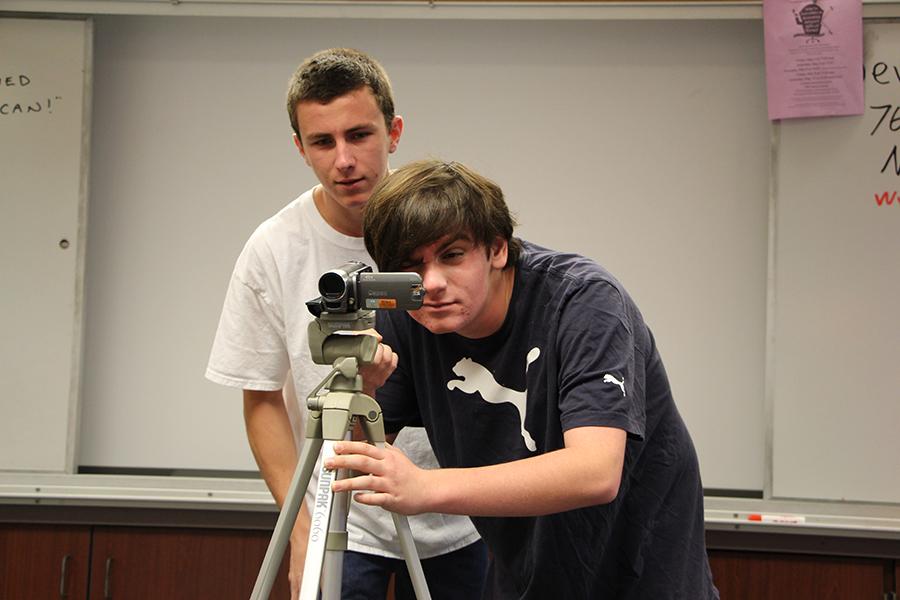 Seniors Sam Krimmer and Stewart Freedman set up for a shoot. Film academy, a three-year program now, gives students the opportunity to master their film-making skills.

In past years, many students who take interest in film have had the chance to spend two years perfecting their movie-making skills in the Film Academy.  However starting next year, the film academy will become a three-year program and will be open for sophomores to take.

Interested sophomores will spend their first year in the program watching movies with film history teacher Mr. Jones, focusing more on critical analysis of films as opposed to making films. Then, they can continue the next two years by creating actual films with film teacher Mr. Brandemeyer.

“I have always been interested in film, and its always been a passion of mine,” sophomore Alison Pateros said.”When I watch movies, I really try to figure out what they mean and how the directors put all of this together, and when I found out that Carlsbad had a class like this, I knew I had to take it.”

In order to take this class, students would have to take college prep English, instead of the honors class, but many want to be in a class that they would would really do well in, which is why film academy is the perfect option for them.

“Honestly, I don’t mind settling for the regular English class,” Pateros said.”I want to take a class that I’m really interested in, and the film class seems more up my alley. It doesn’t bother me because I’m going to be doing what I’m really passionate about.”

Now that this academy is moving from the two years to three, many incoming sophomores are excited to be getting a greater experience with making and producing their own films.

“I think it was such a great idea for them to extend the academy,” freshmen Trinity Serafin said.”It gives the students more experience working with the camera and making films. It also gives them more of an idea of what they want to do later in life and if direction and producing is something they are interested in.”

If film making is something that interests you, consider this three-year film program.

“I’ve never been really interested in English,” Serafin said.”So hopefully, this class is going to be a creative and fun change that can maybe help me decided what I want to pursue.”