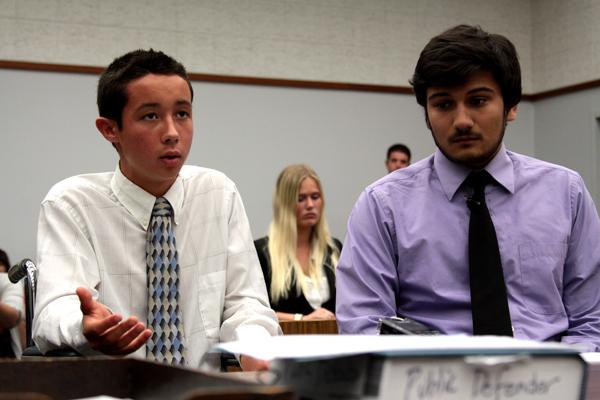 Junior Isaac Brieske listens as junior Christian Freeman requests leniency for Brieske from the judge. Freeman was paralyzed in the accident.

As the gavel crashed into the hard wooden desk, defendant Isaac Brieske’s head and shoulders sank at the weight of the verdict. Tears built in Brieske’s eyes as the bailiff handcuffed him and lead him out, leaving the courtroom with a piercing slam of a door.

Brieske, who plead guilty to DUI and two accounts of gross vehicular manslaughter, presented Judge Katz of the North County Superior Court his statement on April 19 during the sentencing phase of his trial.

Crash victims Courtney Benner, Rebecca Nasser and Kevin Freeman, in attendance at the sentencing, addressed the judge to  provide insight on the effects of Brieske’s actions in their own lives after the Jan. 25 car accident that paralyzed Freeman and killed junior Sarah Nirschl and sophomore Briette Pietroncini.

During victim impact statements, many of those involved, including Nasser and Freeman, forgave Brieske and acknowledged responsibility for the events of the crash, but Sprinkle and Benner, the survivors in the car Brieske collided into, said Brieske deserved everything he received from the trial.

“Isaac must suffer the consequences of the decision he’s made because what he did is unforgivable and no one’s lives will ever be the same,” Benner said.

Benner also brought attention to the negative impact of the collision on her current life as well as her future.

“I never thought a simple thing like going out to lunch could affect the rest of my life,” Benner said. “Not only have I lost my best friend but my future. Besides breaking my arm and destroying my chances at a volleyball scholarship, the emotional effect of an event like this is impossible to ever recover from.”

The defense asked for a shortened sentence due to this being the first charge against Brieske as well as sympathizing for his young age and emotional remorse.

“I feel deep sorrow over the loss of the two innocent young lives. Every day I am reminded of them, their families, their friends and their futures,” Brieske said. “I cannot comprehend the impact of this one decision and words cannot express how truly sorry I am for what I did. I am so ashamed of myself and so sorry for my family.”

Katz sentenced Brieske to serve 10 years in prison due to the serious and reckless nature of his multiple offenses in the deaths of the two students. Brieske’s blood-alcohol level was 0.10 the day of the crash which also reinforced Katz’s sentence.

Katz acknowledged Brieske’s remorse for his actions but refrained from shortening the period of time in prison because of the argument presented by the prosecution who repeated the overall effect of the crash and the statements of the victims involved in the crash.