Sticks and stones may break my bones 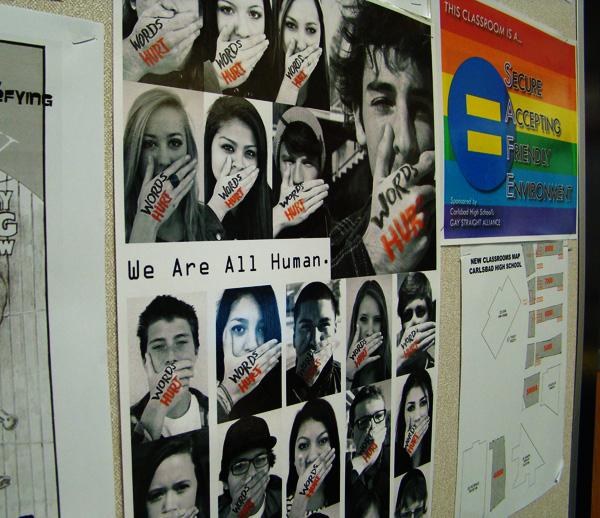 But words will never hurt me?

“A couple months ago, GSA went to a conference where they focused on stopping the use of ‘that’s so gay’ at our schools. And I thought about that and how students laugh when I ask them not to say it. So, I talked with the other art teachers and classes and we decided this was something we wanted to bring awareness to,” said Ms. King.

Remembering the power of the “Ban the R Word” campaign and it’s effect on our school, the art classes decided on a campaign of their own, “Words Hurt.”

Art students were given the task of creating posters to get the message across.  The six students’ whose posters were chosen as the most powerful were: Alex Bui, Shelby Rowe, Davis Yanda, Jeremy Pierce, Cameryn Miller and Bryan Rivera Vazquez.

“I think the whole point of the photo is to give people the idea of how words can bring someone down and even make them cry. That’s why I put myself into the picture and pretended to cry,” sophomore Bryan Rivera Vazquez said.

“I just wanted to support the cause and tell people that I give a thumbs down to hurtful words,”  junior Alex Bui said.

“Ms. King was talking about how you only have a second to make an impact so I wanted something that would really catch peoples attention. Then I thought about how this was for GSA which made me think about how day of silence. So, for my poster I took pictures of students with their hands covering their mouths,” said junior Cameryn Miller.

“I was trying to bring attention that words hurt so you have to be careful what you say around people. I am just trying to achieve the feeling of everybody to be welcome,” said senior Jeremy Pierce

“I did the knuckles together because you know that’s supposed to be like thug and cool, so the idea of writing stop hate on the knuckles sends the message stopping hate is cool,” said senior Shelby Rowe.

“I was bullied for a year and…it felt like my confidence and self-esteem had been shattered by simple words. Hence the name, words hurt. Just plain and simple. The words made my day worse….That’s where I got the inspiration for my design of having a person’s face filled with cracks and falling apart from the inside,” senior Davis Yanda said.

The six students’ posters are now being submitted to the museum of tolerance by Mr. Lord where they will be showcased.

“Dr. Steitz is very excited about this campaign and wants to see us expand it to other schools in the district,” said King.

Ms. King, GSA and the CHS art classes hope their campaign will make an impact in our community, because “words may never hurt me,” in their opinion, is far from accurate.