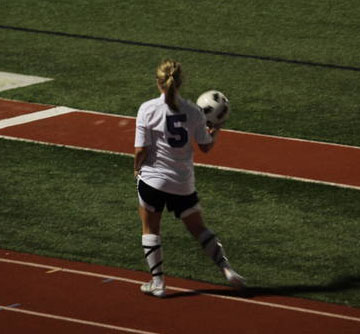 Many people know junior Antonia Duggan as a rising country singer, performing her original songs at big name locations: Qualcomm Stadium, San Diego Fair and the Orange County Fair. However many don’t know of her talent on the soccer field. Toni helped make history for Carlsbad’s girls soccer this year winning league and CIF for the first time ever.

Growing up in Liverpool, one of England’s soccer capitals, Toni picked up a ball at age three and hasn’t stopped since. Her father currently directs a local travel soccer club where Toni plays outside of school. Her family’s life literally revolves around soccer.

“I practice everyday after school for two hours during high school season and twice a week for competitive soccer,” Duggan said. “I also work out at Activ8 for an hour a week plus countless weekends filled with games and tournaments.”

She is known in the soccer community for her long throw-ins which can average 27-30 yards, 30-35 yards on a good day. Because she was involved in gymnastics at a young age, her strong core, back and arm muscles help Toni launch the ball so far.

“Her throw-ins are like corner kicks,” fellow teammate and senior Haley Hendricks said. “It’s so effective! She’s had over 20 assists this year alone because of her throws.”

Many athletes try to mimic Toni’s natural throw-ins with a trick called a flip-throw. A flip-throw works because the momentum of the body while performing a front flip over the soccer ball can help bring more acceleration to furthering the distance the ball travels. However, flip-throws can be dangerous and are often discouraged by coaches. There have been multiple cases where an athlete breaks their necks preforming this tricky advantage.

“I can do round off back tucks but flipping on the ball is really dangerous. I can throw just as far safely without risking my life,” Duggan said.

Unfortunately, all sports come with injuries, and Toni has seen her share of them. Toni has been suffering from a fractured spine since her gymnastic years. Sophomore year, she also seriously sprained her knee. However, fans can’t tell Toni is hurting while she plays. She constantly gives it her all during games.

As for the future, Toni is uncertain about furthering her soccer career into college. She admits soccer has always been a consent activity but singing is her real passion. If Toni works as hard as she does on the soccer field with training her voice, she is sure to achieve her dream of becoming a famous performer.