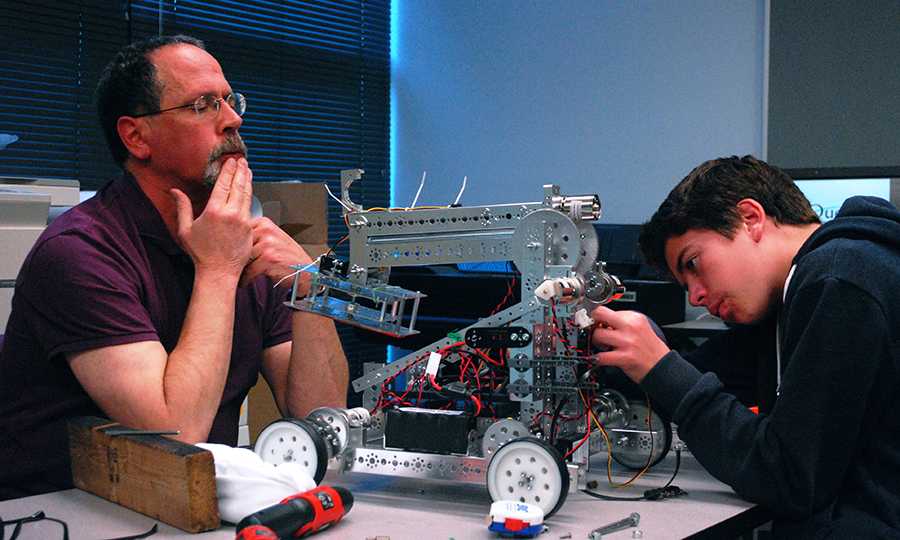 The crucial moment has arrived. The question is: will their taxing hours of building, rebuilding, wiring and testing pay off? The answer lies in the San Diego League tournament, where the Robotics club’s creation must perform the competition’s required tasks successfully.

Every Monday and Friday, the team devotes time after school to practicing interview methods aimed at potential investors and to testing robot commands. Many club members believe that through their extensive planning and revisions, there is hope in winning.

“We will go out and do our best,” junior Tyra Wu said. “We have been planning for a long time, so we should come out strong.”

Robotics club is organized into three teams: Buffalo Wings (the most practiced), Bambusa (rookies) and Bobatech (freshmen).  Rather than focusing solely on robot-building, Team Bambusa’s co-captains, sophomores John Potz and Daniel Murdock, have made it a point to address the outreach proportion of the competition.

“Outreach is a part of the competition where our team needs to use its social skills to vocalize the program that we are in,” Potz said. “To essentially benefit the professional engineers and endorse our robot, we seem to need to focus on communicating as a whole to reach out to our investors.”

The tournament itself is composed in an odd fashion, which makes placing complicated. Teams advance to higher levels by receiving awards from judges or by winning matches. If CHS does make it to finals, there will be four groups of three teams battling, with winning groups advancing in the competition; regardless of these results, all teams that qualify to the finals will also compete on Jan. 19. To beat other challengers, the Robotics club must prevail in all three categories of hardware, software and outreach.

“We all hope to place first, and based on our current design, I believe we will do very well,” Murdock said.

On Dec. 14, Robotics club competed. Buffalo Wings won an award for outreach, and although both Bambusa and Bobatech were nominated for awards, neither won any. But with determination for a grander win, Robotics club will attempt to prove itself at the match on Jan. 19.

“Regardless if we lose or win, it’s the process that matters,” senior Ray Inoue said. “Everyone in the tournament will have a chance to make it to success.”