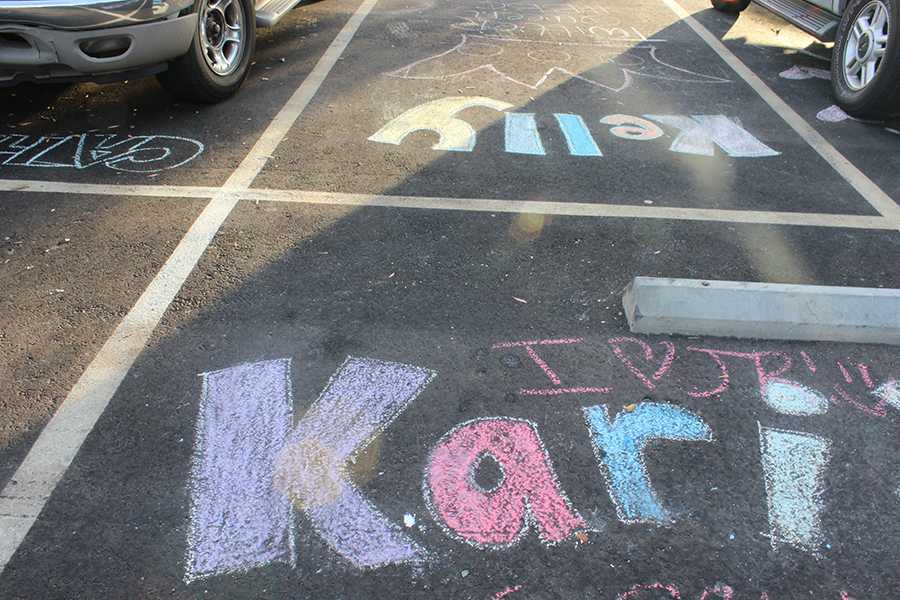 Seniors use chalk to write their names and reserve spots all throughout the parking lot. Throughout the course of the day, some were smeared, but students were quick to fill them back in.

As the daylight waned and darkness assumed control, shadows loomed over Carlsbad High School’s parking lot, consumed in eager scribbling.  With less than 24 hours before the start of the new school year, the anxious figures managed to complete their mission: chalking out their names and pictures in parking spots.

“It was an idea we saw being done at schools like LCC and RBV,” senior Kelly Cowles said. “It somehow got brought up to everyone, and we all thought it was a really cool idea and decided to go along with it.”

About 60 seniors planned to gather in the CHS parking lot at 7:00 pm on the night before school started to chalk up the spots. However, only about 20 students, those who arrived early, actually got to chalk their spots before they were asked to leave.

“At first I was concerned about what was being written on the parking spots,” principal Dr. Steitz said. “But upon walking up, my reaction was, this is really cool. The pictures were great.”

There are over 700 seniors attending CHS and only about 400 parking spots; therefore, not every spot can be reserved. In addition, the parking lot belongs to the district so students cannot officially obtain their own spaces.

“Not every senior could have a reserved spot. There aren’t enough spaces,” senior Taylor Bloomquist said.

The students with spots reserved for themselves understand that the spaces do not actually belong to them.

“Sometimes people park in them, and its not like we can control that,” senior Courtney Haubach said.

When they first heard of the plan, the seniors were excited and thought it was an excellent idea. The students did it as a joke; once it rains the chalk will wash away and the reserved spots will have vanished.

“It wasn’t suppose to be a senior prank, it was just a fun thing we wanted to do,” senior Courtney Haubach said. “We were criticized for it being supposedly exclusive but we didn’t mean it like that.”

Taken completely by surprise, the administration team and ASB director, Mrs. Nasser, met up to discuss the situation and how to respond to it.

“Administration told us if we had done it as a fundraiser it would have worked better, which I agree with,” senior Kelly Cowles said.

During the administration’s talk, they thought about the possibilities that could have derived from this idea, had they taken a different approach.

“I saw it as a real clever idea had we gotten a lot of minds around it,” Dr. Steitz said. “It would have been cool to come in the next morning and see a fantastic mural of senior art welcoming everybody to the school.”