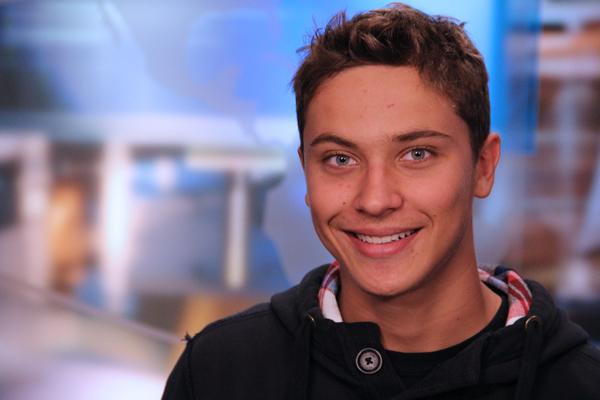 Brazilian foreign exchange student and senior Leo Sander is spending this year studying abroad in Carlsbad. He is taking full advantage of his time here and enrolled in Broadcasting and Surf PE.

Imagine living in another country, foreign food, foreign people, foreign language– an entirely new culture.  This seems daunting to most but some students choose to brave this uncharted frontier.

Senior Leo Sander is spending his first year abroad away from his home country of Brazil, staying with the Quartarone family . Sander wanted to join the foreign exchange program to earn a new respect for a foreign culture and carry on the tradition in his family.

“It’s a tradition in my family, and while growing up my mother always told me stories about the time when she was an exchange student,” Sander said.

Sander realized that life in America was going to be far different from life in Brazil since the only idea of California was what he saw on the television.

“At first I had no idea where I was going considering that the host family chooses who they want and not the other way around.  California seemed like a dream to me, and it’s amazing that I am lucky enough to visit,” Sander said.

In the midst of all the differences, Sander found that Carlsbad can offer a great new outlook on life.

“Pretty much everything is different, but school seems to be the biggest difference,” Sander said. “Because here you can choose  what courses you would like to study but in Brazil you cannot. So here in Carlsbad there are more opportunities to learn what you want.”

Currently enrolled in classes such as Surf P.E. and CHSTV,  Sander is taking advantage of CHS’s open curriculum.

“Everyday I learn more and more.  I’m becoming a better surfer, which is something I could never do in Brazil because of my distance from the coast, and CHSTV has given me a better perspective on how much work actually goes into it being a reporter” Sander said.

For Sander, each day brings a brand new experience, which is something he cherishes and in the end makes him happy he came.

“I am very happy. I get to meet new people and every experience is new, some of the best I’ve had have been the football games but I know there are so many more to come” Sander said. “And even though I have missed out on some things back home, I have gained so much more than I would have had in Brazil.”

The bonds Sander has made will last him his lifetime, and the experiences such as trying water polo for the first time are some he will never forget.

“Its extremely difficult to explain the irony of it all.  In the back of my head, I want the time to pass so I can see my family,  but also I want it time to go slow because I can never get this precious time back,” Sander said.