Minute to Win It assembly ignites competition between students and teachers 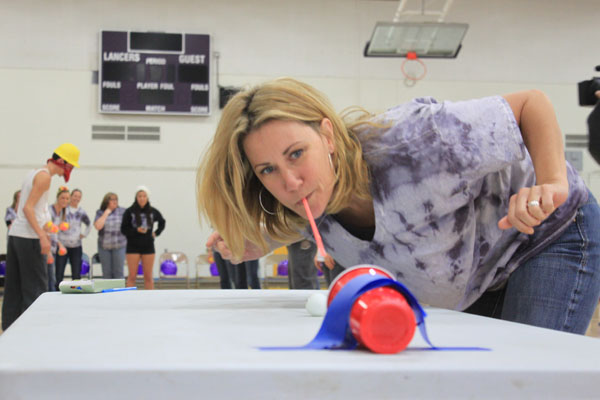 On Feb. 3, students took on the female teachers in the epic battle known as Minute to Win It.

ASB students wore hard hats, which were meant to represent the finished construction of the Old Gym.  With new bleachers and a shiny floor, the assembly drew many students to see the remodeled Old Gym, now called the Lancer Gym.

ASB President Keeghan Sebahar introduced the competitors to the game: simply complete the nine obstacles. ASB members then walked around the gym passing out candy to students who donned purple or anyone showing off school spirit.

“It was pretty impressive,” freshman Eric Yu said.  “There were so many people packed in there.”

As the competition started, the first and second obstacles were quickly overcome by both competitors.  Senior Bryan Kobayashi and his competitor had to bounce a balloon on top of their heads for one minute.

“It was neck-to-neck, but the students were doing better in the events,” Yu said.

Next, the students tested their teamwork and coordination skills against Mrs. Waters as they fought to shoot hoops.  During the next event, Mrs. Penrod and another ASB student had to blow a golf ball through a straw hole that was strategically placed at the end of the table.

English teacher Ms. Schafran completed the last solo obstacle course which was to find her abandoned shoes in a heaping pile and run over to the other teachers.

“My task was pretty easy,” Ms. Schafran said.  “The group decided I should be the one to find my shoes because I was wearing flip-flops.”

From there, all the female teachers had to try to pop the balloons on their seats.  In the end, it was called out as a tied, though the students did finish a few seconds faster.

To close the assembly, the cheerleaders preformed a complicated routine of stunts, once again igniting Carlsbad pride.

“We spread school spirit and supported the school while having fun,” freshmen Kayleigh Roche said.

As students were leaving, ASB Vice President, senior Shannon Caulfield, jokingly asked senior Jeremy Juybari to Morp as a reminder to the female student body to ask their special someone.

ASB will be holding many other dances and assemblies to ensure the students will get involve with the school.  As for the Minute to Win It battle, it was surely well-executed and an enjoyable experience for all.