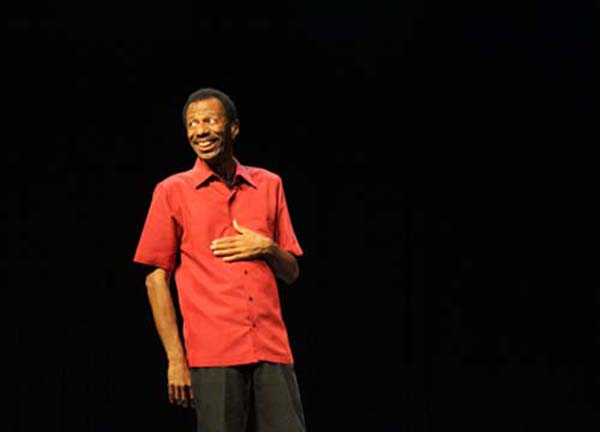 On Sept. 20, famous Deaf comedian CJ Jones came to the Carlsbad Cultural Arts Center to perform for our Deaf, hard-of-hearing and hearing community.

“[I came to Carlsbad High School because] I love to perform and I want the audience to laugh and make them feel good,” CJ Jones signed.

Jones grew up in Saint Louis, Missouri, with Deaf parents and hearing siblings. At age seven he became  deaf due to spinal meningitis; his parents were so happy when they received the news of his deafness “they started dancing around the hospital waiting room” according to Jones during his  performance.

Jones first went to an Oral school, (where the deaf and hard-of-hearing  learn to speak with their voice), and then to a residential school (the deaf and hard-of-hearing learn how to sign, and use only sign), which proved to be more beneficial due to being immersed in American Sign Language (ASL), his first language. After he graduated from the residential school, he went straight to college at the National Technical Institute for the Deaf.

Since ASL is a very expressive language, Jones got into acting because he has been using the techniques which make a good actor: body language and facial expressions.

“I was born an actor, it all started in my mom’s womb, I was always teasing and tickling her,” Jones signed. “She would always tell me to quit it. Acting,  is art, it is very broad, you explore different characters, and everything depends on the story, stage and filming. Acting [using ASL] is not like drama. It is not easy.”

Jones does more in the community aside from just acting; he is a motivational speaker, teaches drama and is a CEO of his own company, SignWorld TV. His goal for SignWorld TV is to create a 24/7 signing channel on the internet. His website for his company is currently under construction, for more information go to signworldtv.com.

While the students and community members benefited from the performance, the teachers did too. Mrs. Large is the new ASL II and III teacher here at Carlsbad High.

“My favorite part of the show was when he incorporated the Deaf students since they saw him back at Magnolia when I taught there, so it was a reunion. He performed for our entire school back in 2002,” Large said.  “Audience participation is very important and it created a very good show for everyone, creating different perspectives. The message was good for everyone.”

During his performances, Jones talks about his travels, experiences, becoming deaf and his family. He connects with the audience through his stories of his life.

“[I connected with him] because he signs my language, so I can understand everything he says,” junior Chrissy Keller signed. “He is a friend of my parents; I think his personality is awesome, funny, nice and easy to talk to. I have known him since I was little.”

Junior Manuel Santiago has been touched by Jones, as well.

“When I was little, like four or five, he taught me how to act and perform” signed Santiago.

Whether you are hearing, hard-of-hearing, or Deaf, Jones portrays his life in such a manner that it keeps you laughing and watching him the entire time. Even if you do not know ASL, Jones has an interpreter to translate the show.

“I thought it [his performance] was funny. He showed a lot of facial expressions and body language. He showed me Deaf culture,” senior Jesus Cadena signed.

“It was hilarious. I have never seen a performance like it before,” senior Justin Feinman said.

As an ASL student, senior Katie Diego noticed how Jones incorporated the Deaf culture and grammar into his performance, and noticed that the people who do not know ASL did not fully understand the Jones’ jokes.

“I noticed if you’re hearing and don’t know the culture, Deaf culture, you don’t understand the Deaf humor. And he is a big supporter of the Deaf kids going to college. I really appreciate it,” senior Katie Diego said.

While his culture may not be common, his influence is overwhelming; differing culture does not mean there is a permanent communication block and that you cannot connect with them. While Deaf culture is extremely different from the ‘normal’ culture (hearing culture) you think of today, both overlap and influence each other.