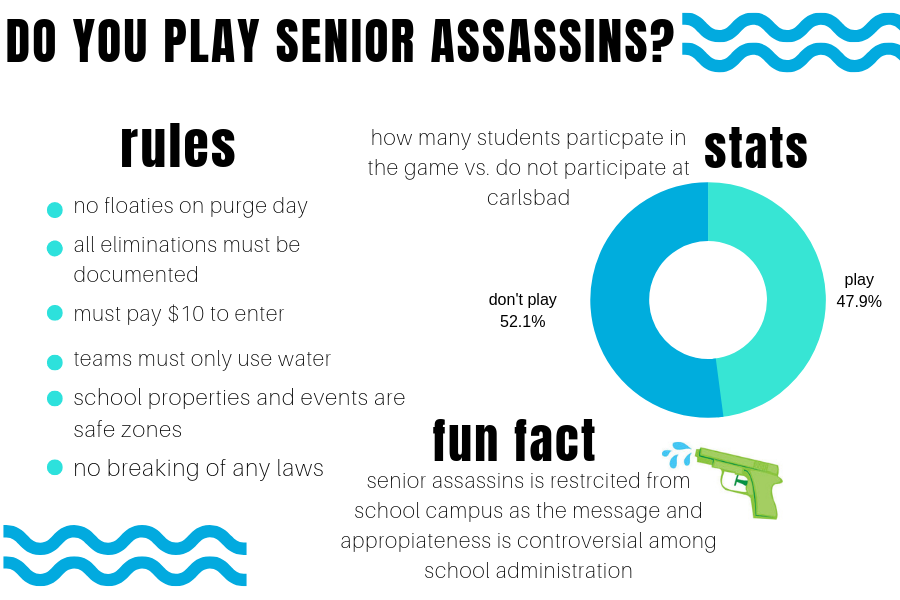 Delving into the pros and cons of senior assassins

Senior assassins… a game that takes over the senior class with adrenaline and excitement. Senior Tosh Everett is known for his intensity and dedication in the game. Together him and his partner Trent Lopez have set their best foot forward to come out on top. By putting in a surplus of time, the duo aims to get their targets out and hopefully end up with a win.

“I like senior assasins because I’m a super competitive person and want to win money,” Everett said. “The mystery and the heart racing adrenaline is what makes senior assassins fun.”

Everett’s passion for the game reflects in his efforts to get his targets out and win the jackpot. Him and his partner have gone above and beyond to achieve their goals.

“I remember camping outside my targets house at five in the morning to make sure I was able to get her out when she came to her car,” Everett said. “Trent was there to capture the moment on film.”

Before this years game of senior assassins began, the duo had a game plan that they would follow throughout the year to achieve the best results. So far, the plan has proved to succeed.

“Getting ‘wet’ or ‘eliminated’ out of the game is the most frustrating part for sure,” Everett said. “So me and my partner had the strategy to be more of defensive players. The strategy proved to be super effective.”

The duo has exectuted their plan to perfection and it has kept them in the game. Their careful preparation and attention to detail has benefitted them in the long run.

“Future advice to anyone who wants to win would to not become careless,” Everett said. “Being careless is what is gong to get you out. You always have to be ready and stocked with floaties to ensure your immunity. Also to plan out your day on purge days so you aren’t caught lacking.”

Everett’s experience in the game has made him believe that everyone in the class should participate in senior assassins. After all, you are only a senior once.

“The tradition is important because it gives underclassmen something to look forward to at the time of their senior year,” Everett said. “Seniors should chose to participate in the game in the future because you do not get to go back to high school and relive it. You have one year to play the game and that’s it.”

Emma Lupica, Editor-in-Chief
Emma Lupica is a Senior at Carlsbad High School and this is her fourth year in journalism. In the journalism class, she serves as an Editor in Chief and Managing Editor. In her free time she enjoys going to the beach, hanging out with friends, spending time with family and playing with her dog. She also works at WaterWise Swim School as a swim teacher. Next year, she hopes to attend a four year college.
Leave a Comment

Every year, ASB organizes senior assassins, a game where seniors compete for a cash prize by teaming up and shooting water at their targeted classmates.

While the game builds up a lot of excitement, students’ expectations may actually be set too high. After playing a similar game on a cruise ship, senior Austin Macdonald-Shedd decided to sit senior assassins out. And he’s noticed that when people do join the game, they tend to lose interest halfway through.

“The effort you have to put in and the fun you think you’re going to get from it doesn’t really line up,” Macdonald-Shedd said. “I know way too many people who were there and literally didn’t try.”

On the other hand, students can get swept up in the game, resulting in serious consequences. Competitors wear floaties, which serve as protection against assassins. But ASB announces purge days– days when the floaties can’t protect you. On these days especially, the students’ pent-up energy engulfs the campus.

“[On] a purge day, our assassins chased [my partner],” Good said. “She was sprinting and didn’t really look so she ran right into a car. You’re not supposed to [play the game] in the parking lot, but people still do. She had a bruise but she’s fine now.”

Despite the administration’s effort to enforce some rules, seniors still get carried away. Beyond the intensity, competitors have found loopholes in the game. This has left our school’s tradition with room for improvement.

“[Senior assassins] could be harder and more secure,” senior Cassidy Good said. “A lot of people figure out who the targets are and claim they have a list of all the targets. I was told who was getting me, so people can pretty much figure it out really easily.”

By modifying the structure of senior assassins, ASB can improve the game to keep seniors excited. Meanwhile, the core purpose of the game is still something a lot of seniors appreciate, which keeps students of other grade levels excited for their competition.

“I wasn’t in it that long but it was still fun playing it [because of] the suspense and being with a team,” Good said.

Catherine Allen, Editor-in-Chief
Catherine Allen is a senior this year, and she is looking forward to her third year on Lancer Link as a managing editor and editor-in-chief. Catherine is passionate about writing stories that improve and highlight the uniqueness of her community, and in her free time, she enjoys playing guitar, taking photos and playing tennis.
Leave a Comment