Julia Read is co-president of the Speech and Debate Team 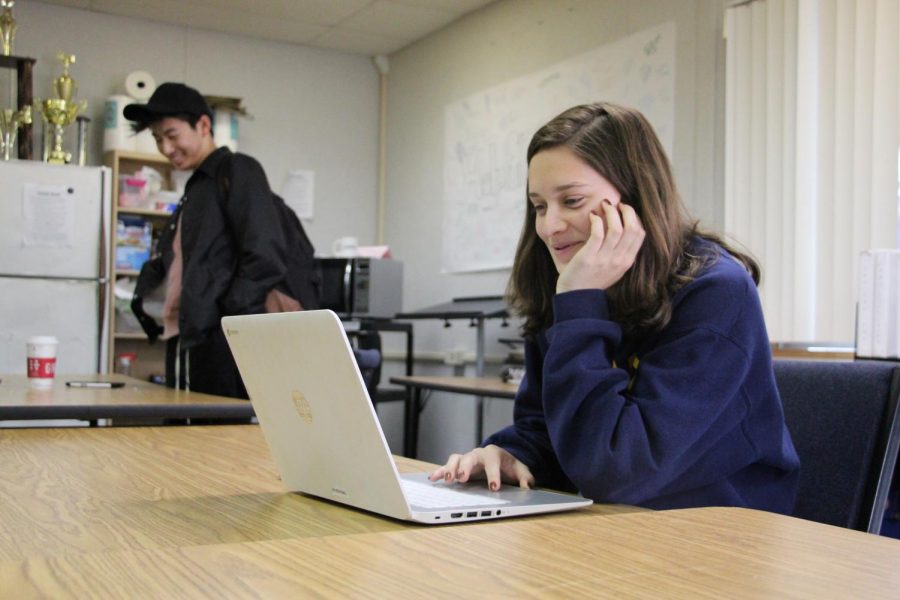 Julia Read working hard on preparing for her next speech. Julia is the co-president of the club behind the award winning speech and debate team.

The Speech and Debate Team is well known for its success and talented team members.

Senior Julia Read is a pivotal member of the team. Read not only competes in events herself, but she also helps others improve their skills.

“I have a few roles in speech and debate right now,” Read said. “So, I’m co-president of the speech and debate team with Arin Zwonitzer, my best friend. Along with being president, I also teach P.F. Debate, which is a two-on-two paired debate. I also participate in five events, those vary from prepared debates to unprepared speeches.”

Read’s success in Speech and Debate does not prevent her from working to improve her skills.

“I started debate a little later than most people,” Read said. “So, I think for me, my goal is still to improve my debate skills. I think it’s something really important, and it’s something I’m really passionate about. I think your ability to reason and argue and speak concisely with few words is really important, and it’s just so cool to be able to have that experience, either alone in an L.D. Debate, or with my partner in P.F.”

Read first learned of the club at a demonstration at her middle school.

“I went to this demonstration in eighth grade,” Read said. “I thought all the people there were really charismatic and nice. It was interesting to meet seniors- people that were so much older than me- that still were interested in helping younger people, and teaching them. I’ve also always been really [talented] at public speaking, so for me to try something that was really out of my comfort zone, i felt like was a good thing to do.”

Read has created an array of positive memories during her time in Speech and Debate, her favorite being from her first year on the team.

“You know, to be completely honest, I think one of my favorite memories was from my freshman year,” Read said. “It was the last tournament. It was the tournament that qualifies you to state and I was the only person who finaled in congress who didn’t get a high enough place to go to state, and I was so dismayed-like I was beaten up- but I just remember so many people coming to me and telling me how great of a job I did, and in the team picture they let me hold the sweepstakes trophy, which is what you get for having the most points accumulated for a team. So, I really felt like regardless of if I won or lost, I would have people there supporting me and caring about me, and that was more important than even going to state, I think.”

Being involved in so many aspects of the team has allowed Read to be a part of many rewarding experiences. Read shares what her favorite part of being a captain is.

“I think my favorite part is probably the moment when you feel like you’ve inspired someone, and that doesn’t really happen that often in debate, but when you’re teaching people-you’re leading people as a captain-I think that’s where the real good [experiences] come in,” Read said. “So, yeah, it can sometimes happen in something like teaching, but there are times where I’ll give a speech that I feel like I had a good message and something really important to say, and that makes me feel like everything was worth it.”