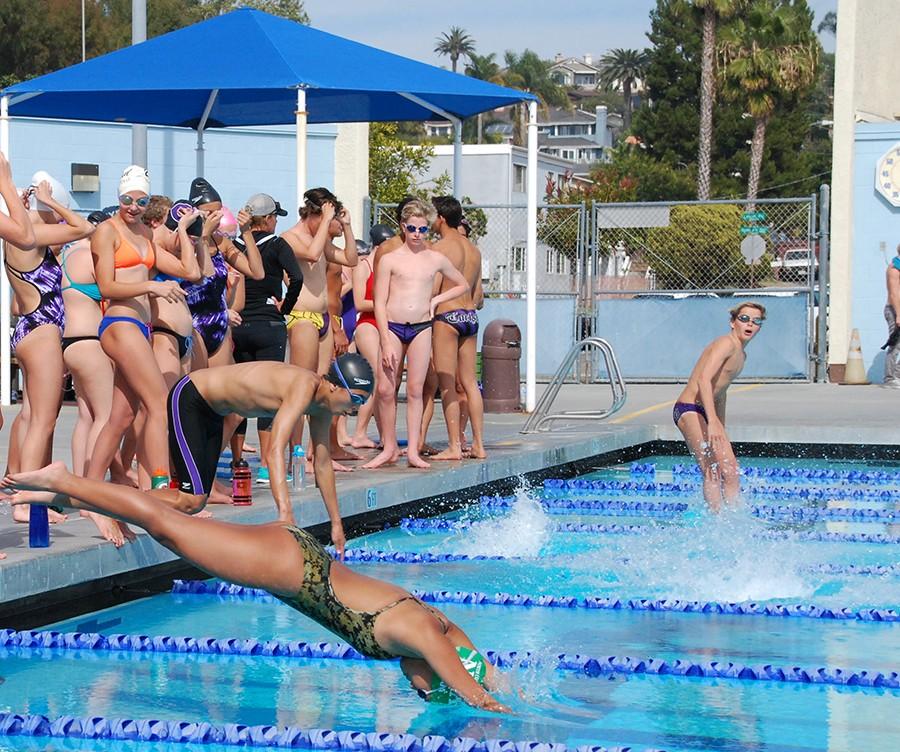 Swim team has meets every Friday. Their first home meet is March 20th against Torrey Pines.

Despite the snowy blizzards that continue to rage throughout other parts of the country, CHS swimmers are ready to get in the water. Swim season for both girls and boys is approaching fast and swimmers have been working hard to make sure it will be the best year yet.

“I’m looking forward to improving,” senior Carolyn Oertle said. “I want to go all out and be the best I can and not worry about getting injured.”

Oertle has been a dedicated swimmer for CHS since her freshman year.

“I like the work out that I get from swimming,” Oertle said. “It’s an all-around good sport. I like being able to compete with my friends and supporting the other girls as well.”

Senior Sage Homer is also excited to compete in his fourth and final year on the team. Homer has been swimming since sixth grade and has competed as a member of varsity swim since his freshman year.

“Swimming keeps me in shape and keeps me away from bad decisions because I’m always busy,” Homer said. “I have a lot of friends on the team and even though most are on water polo it’s really fun to compete with them during season.”

Homer is excited to perfect his main events, the 100 butterfly and 200 individual medley, in preparation for CIF.

“I’m looking forward to swimming with my friends and being a bigger aspect of the team as a senior,” Homer said.

Despite coaching swim for over ten years, Coach Barton has remained passionate about his job as a teacher and mentor and is extremely looking forward to the upcoming season.

“My favorite things about coaching for Carlsbad are the improvements and developments of the student athlete,” Coach Barton said. “They come in here somewhat immature but I have the pleasure of watching them mature and grow over four years as they become seniors.”

Oertle, Homer and Coach Barton are all certain about making the most out of the upcoming season.

“I’m most excited about the enthusiasm and passion for swimming I see from these athletes,” Coach Barton said. “I think that there are a lot of student athletes that want to be better swimmers and I really enjoy that passion.”