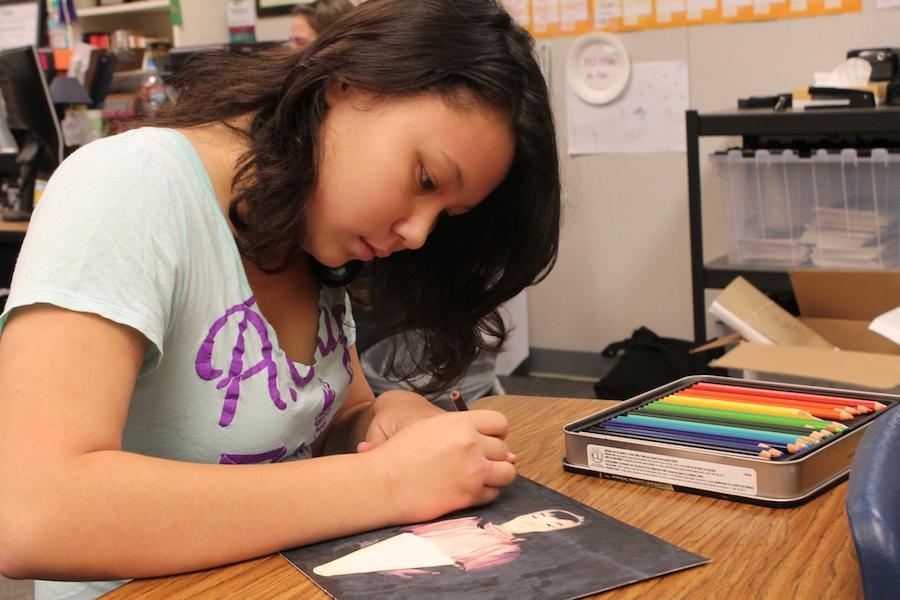 Junior Lehua Plaza expresses herself through many different activities. One she enjoys most is art.

When you think of a movement, you think of protests and petitions. However, Carlsbad High junior Lehua Plaza combines her opinions about with her art.

Currently, Plaza is working on a piece of an iris blooming out of a syringe to submit to AP Art.

“It’s meant to say that we cover up nasty things, like the death penalty, with flowery words,” Plaza said. “I’ll see all these political discussions and controversial things and think wow that’s a good idea-I can make people think about this because there are some things that are not better left unspoken.”

Along with expressing her opinion, Plaza enjoys sharing her family’s Hawaiian background within her artwork too.

“I’ve been researching the sovereignty of the Hawaiian nation and I want to do art about that in the future,” Plaza said.”Ever since I was born my mom and my dad would take my sister and I to the big island every two years and just really immerse ourselves in Hawaiian culture.”

Although Plaza has passion for her art, she has a different career in mind for the future.

“I do art to get a message across as a side project because I want to be a teacher when I grow up,” Plaza said. “I want to be an elementary speech therapist. It runs in my family.”

Since Plaza grew up with many speech therapists in her family, she plans to build off their traditional practices and integrate her own method.

“I plan on bringing my experience with ASL and use that to interact with the deaf community, because I know there are deaf children and their parents say will you help our kid with speech therapy,” Plaza said. “I know a lot of people have had bad experiences with speech therapists, so I wanna be the ‘go to’ for the deaf population.”

Until then, Lehua savors her time as a high school student through reading and playing video games with her sister.

“My sister and I play a variety of video games such as Mario, and Little Big World,” Plaza said. “Occasionally, I’ll put on the mic and tell a couple of guys you need to play better, you have teammates who are relying on you and they’ll be like ‘woah you’re a girl’ and I respond with, ‘yes I’m a girl and I’m beating you.'”

Adding on to Lehua’s artistic list of talents, she follows her mothers footsteps in Hula, the traditional Hawaiian dance.

“It’s like any dancing, I just think this one has a little bit more spiritual and cultural meaning to it so you have to learn to express that too,” Plaza said. “It’s an art that’s been passed down for generations-I love it.”

Lehua embraces her culture in many aspects, and will continue to do so.

“My mom makes some pretty good Haupia pie–it’s a hawaiian coconut dessert,” Plaza said.”Hawaiian culture is really deeply engrained in our family. I don’t think I could get rid of it if I tried.”