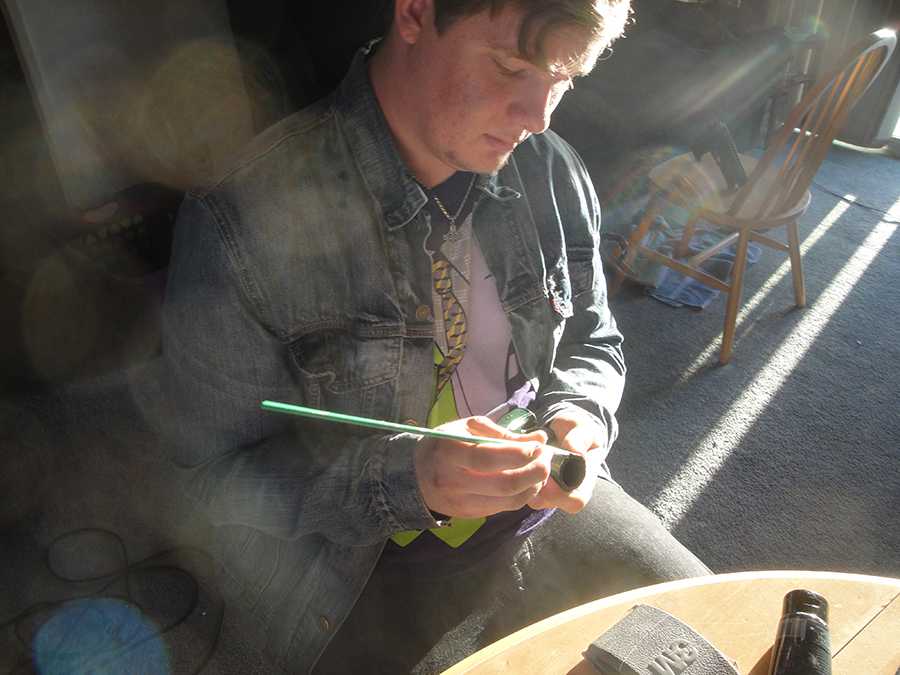 Cheyenne is adding a metallic look to a prop flare gun. He does this by sanding away some of the paint and putting silver sharpie over the area.

A  box of scraps, a trusty glue gun and some elbow grease– that is all senior Cheyenne McIntire needs to get into his game. Inspired by movies such as “The Thing” and TV shows such as “Face Off”, Cheyenne has always been fascinated with practical effects. From costumes to steampunk jewelry, McIntire proves his prop-making skills are far from ordinary.

“I’ve always liked movies, and props tended to be the most important part of making the film seem closer to reality,” McIntire said. “After all, where would “Star Wars”, “Pirates of the Caribbean” or “Elysium” be without their props?”

McIntire also proves that he is not restricted to any genre of props in particular; he builds props of every wave of the spectrum. Sporting an impressive Joker costume at last year’s Comic Con, McIntire’s diversity shows.

“I love science fiction and fantasy, so I like to stick to making props from that genre,” McIntire said.  “Another area that I like is steampunk, which is also an area for my inspiration. I’ve made many costumes and outfits. I designed and created a Joker costume that I wore to Comic Con. I’ve also made an Ash from “Evil Dead” costume that I custom-made a chainsaw arm for.”

To further pursue his artistic passion, McIntire has enrolled into Carlsbad High School’s Film Academy, where he can utilize his props in the movies he makes. In a drama that he directed and starred in, he also provided the makeup for the other actors in the film.

“I hope to continue working on my props and to get into the movie business,” McIntire said.  “I’ve always liked the idea of working on a movie set, and I think being in the filmmaking class here at CHS has helped me appreciate the idea even more.”

With plans to attend the Stan Winston School of the Arts next year, McIntire is certain about continuing his work in prop-making.

“I’ve been friends with Cheyenne for a long time,” senior Dylan Pope said. “Also sharing an interest in the arts, his props have always blown me away.”