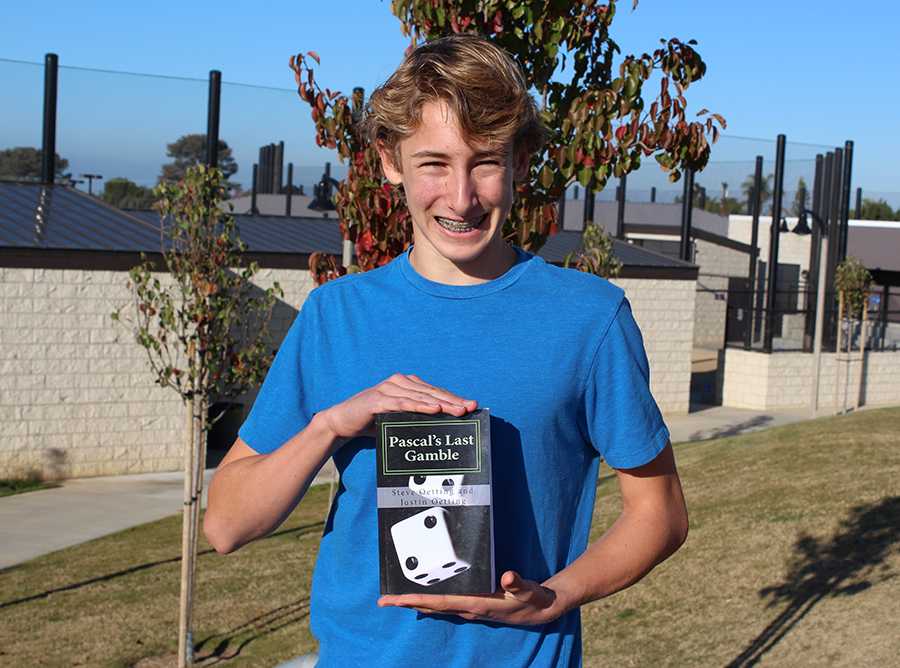 Justin Oetting holds his book "Pascal's Last Gamble." Justin co-authored the book with his father, Steve Oetting, as only a sophomore!

Fathers and sons share a special bond unlike any others; connecting over their shared passion for writing novels, sophomore Justin Oetting and his father, Steve Oetting, co-authored a novel.  “Pascal’s Last Gamble” which was published on Nov. 4 of last year.

“The book is a legal thriller,” Justin Oetting said. “The main focus is Pascal, an early modern philosopher, who must explore his pragmatics, keeping philosophy in mind and his wager.”

In the novel, the main character Raj Pascal Rex, an attorney, encounters a bumpy road and has to make tough decisions regarding his girlfriend and career. Steve and Justin Oetting take Pascal’s wager and use the novel in a way where the character must face the true meaning of faith and decide what is most important in his life.

“Our novel is an apologetic to Blaise Pascal,” Steven Oetting said. “My inspiration was from a college philosophy of mind class where I discovered my passion for the subject of philosophy.”

They made sure it conveyed a deeper meaning through the entire plot of the story rather than just a light “summer read” type of novel.

“It took us no more than two years to write it,” Justin Oetting said. “But it took about half a year to edit because we sent it to others as well as editing it ourselves, and we published it through Amazon.”

The Oettings sent the novel to Justin’s grandfather and a professor at San Marcos to get their drafts revised. This is not Steven Oetting’s first experience with publishing, his first book  was “The Source of All Good News”. Due to Steven’s previous experience it only took about a week for them to publish “Pascal’s Last Gamble.”

“Publishing these days is really difficult, it has changed a lot in just the past decade,” Justin Oetting said. “In order to get a publisher, you usually have to have at least three books published, have agents, and have to go to writing conventions.”

Justin Oetting definitely sees himself continuing in the process of writing novels. He wants to write fiction, especially dealing with either philosophical ideas or deeper types of reads.