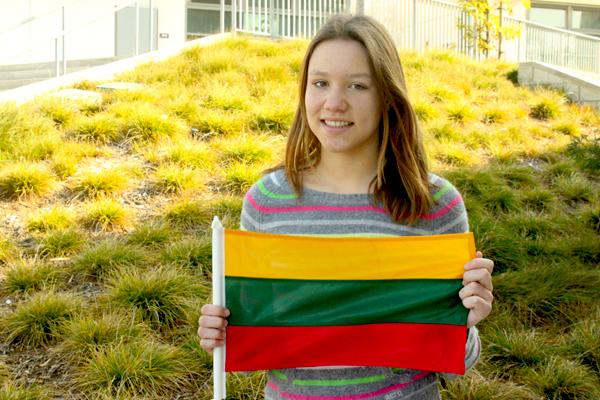 Gabija Grigonyte poses with the Lithuanian flag. Grigonyte was born in Lithuania, a country near Poland and Latvia, but moved to the United States when she was four years old.

Freshman Gabija “Gabby” Grigonyte may have grown up in Carlsbad, but Gabby was born somewhere far from the place we call home. Lithuania is a country in Europe located near Poland and Latvia. Grigonyte moved to the United States when she was four years old, but Lithuania is still a significant part of her life.

“I have a lot of family in Lithuania,” Grigonyte said. “The only family I have in America is my mom, dad and brother.”

When first meeting Grigonyte, one could never guess that she was from a different country.

“People don’t really know I’m from Lithuania when they first meet me,” Grigonyte said. “But when they hear me talk to my parents in a different language, they realize I am.”

The country of Lithuania may be small in size, but Grigonyte explains that this can be a beneficial factor.

“I like how everything is close,” Grigonyte said. “You can drive from one end of Lithuania to the other in around four hours.”

Moving to a new home is a significant alteration, but moving to a new country is life-changing. Grigonyte says the most challenging factor for her was the language. She now fluently speaks English and Lithuanian.

“When I got here, my mom, dad and I didn’t know any languages except Lithuanian and Russian,” Grigonyte said. “So my mom went to college to learn English, and I went to school to learn English.”

According to Grigonyte, both cultures offer her something different. One of the similarities between them is the love for basketball. At Carlsbad High, Grigonyte is a member of the freshman basketball team.

“Basketball over there is a big deal. That’s partly why I play it,” Grigonyte said.

Overall, Grigonyte loves her home in America, as well as her hometown in Lithuania. She is able to incorporate her Lithuanian culture into her home here in California.

“I eat Lithuanian food all the time. My mom makes it,” Grigonyte said, “I talk to my family on Skype and go to Lithuanian reunions.”

Although she has grown up in California, Grigonyte has a passion for her Lithuanian background. She manages to make new traditions while keeping her old ones.

“I like America because of all the things you can see. There’s so much here that there isn’t in Lithuania,” Grigonyte said. “And I like Lithuania because of my family. Everyone there is simple and nice.”