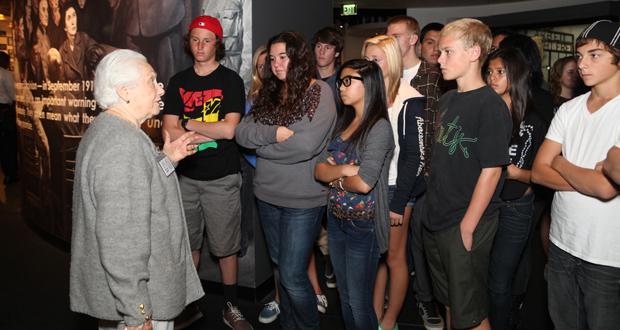 Anyone can open up a history book and learn about the past, but not everyone gets an opportunity like the one given to sophomore classes each fall. Students were in a for a surprise when they stepped off the bus and into the Museum of Tolerance in Los Angeles.

“I was expecting the generic, ‘Hiter is bad, Holocaust is sad’ sort of stuff,” sophomore Sarah Sheets said.

Tragedies such as the Holocaust have been drilled into kids’ heads for years, but this museum brought a whole new perspective to the struggles of the past as well as present issues with humanity.

“It was kind of shocking to learn there are things going on in the world right now,” sophomore Gillian Allen said. “It hasn’t really disappeared.”

Upon entering the museum, tour groups began the journey through the Holocaust section. Videos, pictures, artifacts and personal belongings all originating from Holocaust torn regions of Europe enhance the experience as students become exposed firsthand to a world and time which greatly differs from their own.

“When they say x amount of people died, those numbers never really connect to people. We never really feel that impact,” Sheets said. “And I am not sure any museum can really portray that impact, but this one came close.”

The truth and reality displayed throughout the process was surprising and meaningful to most. The museum went beyond the facts and presented unique exhibits in a fashion that reveals the emotional turmoil of oppression.

“I was humbled by all the suffering these people went through,” sophomore Reece Bryan said. “They didn’t deserve it and I wish I could have done something.”

While many students reacted differently, sophomores managed to find a similar feeling of devastation. After experiencing one extreme of oppression, visitors then cross the museum to a “tolerance” themed series of smaller exhibits relating to modern-day life.

“The tolerance section brought a new perspective about prejudice and showed me the value in living in a society where everyone is equal,” sophomore Courtney Griffin said.

Despite the depressing facts, this part of the museum introduced the concept of hope among different targeted groups and their roads to progress. Giving students a taste of inspiration and a touch of motivation, it forced students to open their eyes and learn to respect one another.

“The museum talked about bullying on a larger scale. It made people really aware of what their reactions can result in,” Allen said.

After seeing what kinds of bullying still exist, students found reasons why they should become a part of the change. Quite unlike the bus ride there, for many the approximately 1.5 hour trip home consisted of realization and contemplation.

“When it was over, I thought for a long time about people,” Griffin said. “I realized that it doesn’t matter what humans look like or what they believe. What makes us different is what makes us special.”

The museum aims to teach students about the negative consequences of injustice at all levels of severity. The trip affected everyone in attendance in some way or another, and the participants will take with them their own individual lessons as they grow into leaders of the future.

“While it made me depressed about society, it was inspiring to know there are people out there creating museums like that and being a part of the change,” Sheets said.