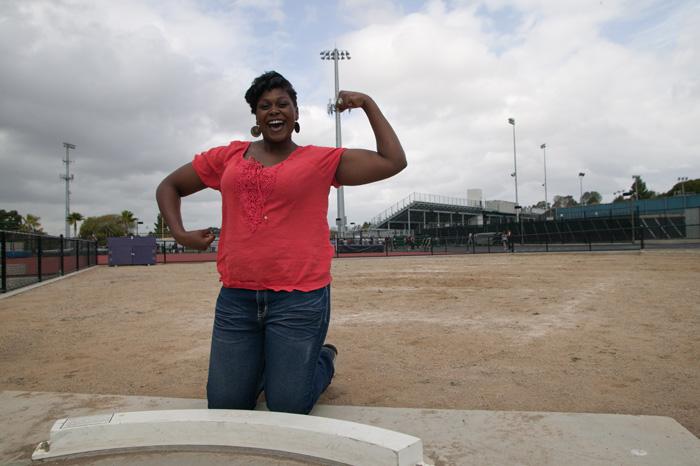 Many student athletes are no strangers to excelling in multiple sports.  However, one such athlete, senior Breana Jemison, has not only proven herself to be a versatile athlete on the court and on the field, but has also won a state title and broken a school record.

In addition to these impressive accolades, Jemison was recently awarded the San Diego Hall of Champions Significant Achievement award for winning the California state title in shot put.  Jemison was able to attend a dinner where she not only received the award, but also mingled with Olympic athletes.

“I was really surprised” Jemison said. “It felt great to be acknowledged.”

During the 2011 track season Jemison made a name for herself after she broke the school record of 40 feet for shot put.  While many students would be fine with breaking just one record, Jemison has her sights set on bigger and better goals.

“My plans are to hopefully break the national record of 53 feet” Jemison said.

When she isn’t setting new records for shot put, chances are Jemison is probably in the gym honing her basketball skills.

“I usually spend about two to three hours in the gym just shooting and practicing fundamentals” Jemison said.

Her time spent in the gym also gives her an edge when on the field.  For Jemison, the speed and strength needed to shoot a basketball is just as applicable to shot put.

“Both sports require a lot of hand-eye coordination” Jemison said.

While the track season is far from over and there is still more than enough time for Jemison to improve her already impressive high school career, what college she will be attending in the fall is never far from her mind.  Having no particular preference towards either basketball or track, her decision will ultimately come down to which sport will yield more for her in college.

“It depends on what the college is offering” Jemison said.

For now, though, Jemison is looking to end her high school athletic career with another broken record.