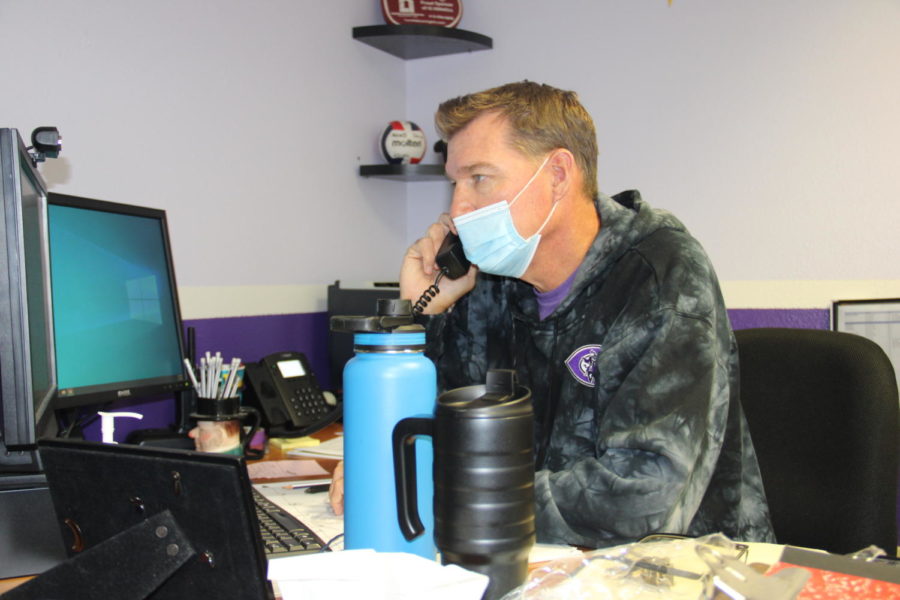 Athletic director Tom Bloomquist works in his office during the day and coaches women's volleyball in the afternoons.

Tom Bloomquist, Carlsbad High School’s new athletic director, took on the role this school year after spending most of his life in the administrative and coaching side of education, guiding teens in both academics and sports.

After spending more than 30 years in education, Bloomquist accepted a job offer that gave him a way to return to his roots at Carlsbad where he started his career.

Being in education for most of his life, Bloomquist has always valued his relationships with his students. He has therefore taken up positions that reflect his passion for connecting with others.

“I was the principal at Valley Middle School, I was the assistant principal here before that, and so I spent a lot of time doing administrative stuff, and at the end of the day, I decided I wanted to go back to the classroom and do things I really love, which was being with kids and coaching,” Bloomquist said.

Head beach volleyball coach and science teacher Tod Muilenburg has a long history with Bloomquist. He has even coached teams with him in the past.

“I’ve known Mr. Bloomquist for a long time,” Muilenburg said. “We go way back. He’s a great individual, a great teacher, a great administrator. I’ve interacted with him, coached with him and against him in little league soccer and baseball, and worked with him here at Carlsbad High School.”

Before accepting the job, Bloomquist took a step back and thought about what he would be giving up by leaving his position teaching at Sage Creek High School. The most notable thing in his mind was the relationships he formed and the ones he anticipated making.

“I’m leaving my kids behind,” Bloomquist said. “That’s kinda how I felt at Sage Creek. I was going to have seniors coming in who I had their siblings, and everything else, I was really looking forward to that. So that was a factor, you know like, ‘do I want to leave those kids behind?’ They’re fine without me, it’s not like they weren’t going to survive or anything, but I really wanted a chance to teach them their senior year.”

In a new position with new dynamics, the relationships between Bloomquist and others changed. Moving into a position of power shifted things with other coaches, but he hopes students still see him the same way.

“I’m still me and I love interacting with students, that’s what this is all about,” Bloomquist said. “It’s about building relationships for me as a teacher, as an athletic director, it really doesn’t matter. Probably with the coaching staff it changes a little bit because I’ve got to make sure they’re doing what they’re supposed to be doing versus just being the head volleyball coach.”

Even though Bloomquist moved to different schools around the Carlsbad district, his relationship with Carlsbad High was important to him as he made his decision. As someone who started his career at CHS, Bloomquist felt it was a big part of his life.

“It was like the right timing and everything so that’s kinda how I came back to Carlsbad, kinda where I started… This is my 32nd year in education and it just felt like it was time to ‘come home’ so to speak,” Bloomquist said.