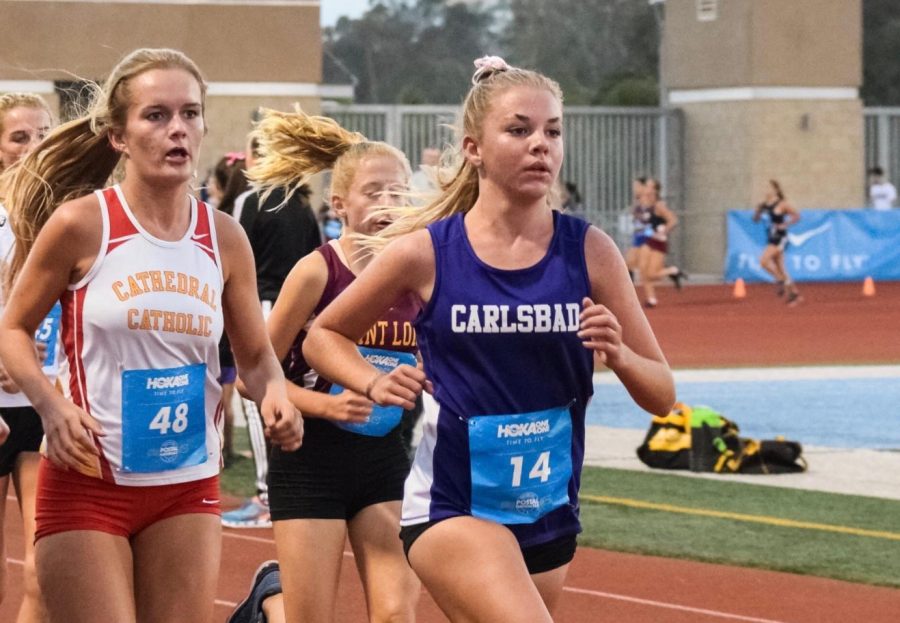 Young keeps her lead on the opponents. Staying focused on the race is crucial to be successful. (Photo Courtesy of Morgan Young)

Cross country is a sport of endurance, where teams and individuals run long courses over different terrains such as dirt, grass, sand or concrete. Those who take part in the sport are individuals that constantly push their limits of stamina. It is a challenge and takes perseverance and dedication. It takes years to construct the strength and energy to be successful in this sport. There are some students who are pushing their limits and finding the highest level early.

Freshman Morgan Young is on varsity girls cross country this year. She has taken the time and worked hard enough to make it to the varsity team in her first year at the high school level. It is challenging enough to make a higher team, but running with some early adults and older teammates is another story. She has worked hard learning how to run at a level some freshman dream of.

“During the summer we started preseason, you have to train and work hard and then you run a time trial,” Young said. “I was one of the fastest so I got a spot on varsity.”

Most freshmen would normally begin on the freshman team, or possibly JV. Young is able to get a feel for the level of running it takes to be on the varsity team and establish what her own goals are for this season.

“I was really excited because in most sports it’s not likely for a freshman to make varsity,” Young said. “I was really happy and surprised I was able to make the team.”

Throughout the preseason and start of the season, Young had an idea about what team she wanted to make. After knowing that she would make varsity, it pushed her to work even harder than before.

“I was a little bit nervous, but I was going to fine either way,” Young said. “I just wanted to run cross country and have fun, but it was in the back of my head that I wanted to make varsity.”