Analyzing the science behind tennis 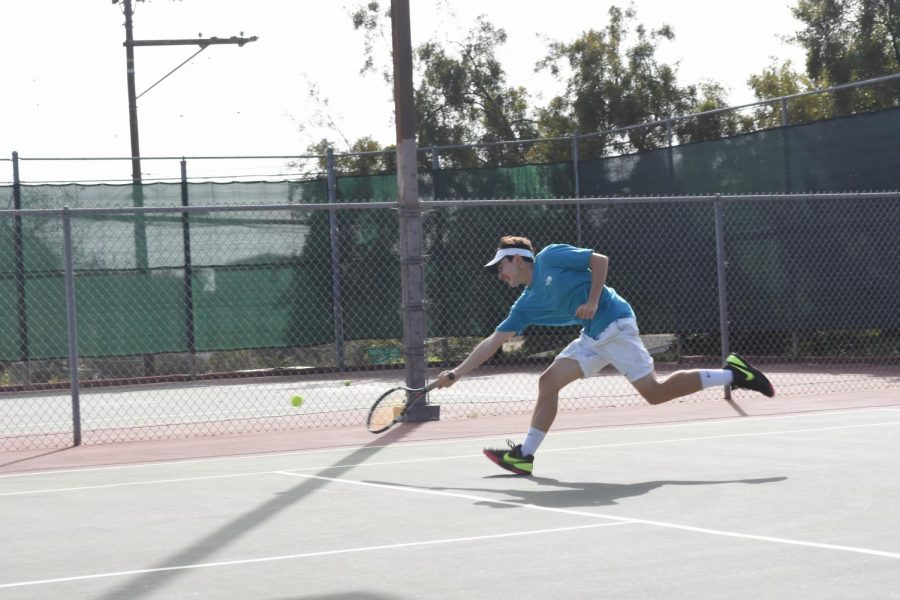 Junior Tomas Montano dives to return a ball during practice. The tennis team continues to practice in order to prepare for playoffs.

From a spectator’s perspective, tennis can appear just as a ball being hit back and forth. But to tennis players on our school’s team, they must learn all of the science that goes into tennis and how it applies to their playing style.

The players have an understanding of how physics affects the game and how you can manipulate the laws of gravity on the court. One player has  already been using this to his advantage.

“In physics class, we learn about Newton’s first and third laws, and I realized that this totally applies to tennis,” sophomore Stephen Zheng said. “Newton’s first law is the fact that an object at rest stays at rest, and an object in motion stays in motion with the same speed and direction until acted on by an outside force.”

This law means that you can direct the ball with power in an opposite direction with a tennis racket. A tennis player applies Newton’s law  by adding hitting styles such as topspin or backspin. Also known as the Magnus Effect, hitting the ball at a certain angle with your racket causes the ball to have a different bounce on the opponent’s side, making it more difficult to react to. Practice after practice, tennis players apply the science behind the strategy and utilize this tactic on the court.

“During a rally, I like to give the ball top or backspin, as it often catches the opponents off guard because of the different bounce the ball takes,” sophomore varsity player Jake Kasai said.

For even more of an advantage, players want to make sure they have high quality rackets, balls and a well designed court. Gear also affects your play during a match, as good cleats will help with friction, movement and pressure. Zheng has made sure to get all styled out for his matches with the right and smart gear for the match. Understanding the technicalities behind the sport allows for the players to feel confident in their strategy, thus providing them with a better opportunity to achieve victory.

“I know my cleats will be able to withstand a lot of force, and my racket is able to use kinetic energy and power into every hit,” Zheng said. “I know I can apply certain forces and spins on a ball, and the court I’m playing on will have good friction and cushioning to play on.”