Striking out the competition on JV baseball 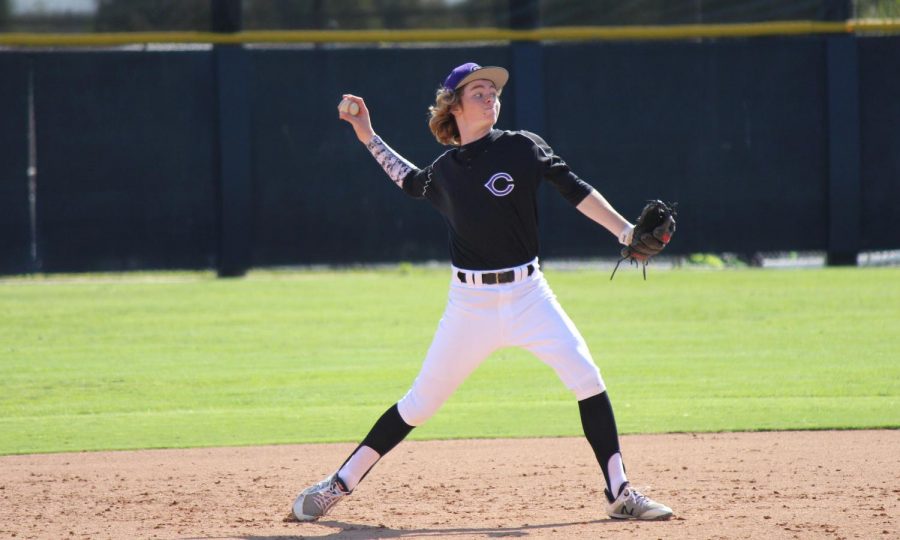 Freshman Konrad Bohnert throws the ball to first base in hopes for an out. The JV team played Rancho Bernardo and lost six to four.

The JV baseball team is nearing its season, and the coaches are looking at who will emerge as the team’s leaders. Konrad Bohnert, the only freshman on the JV team, has locked in his role as the starting shortstop and has earned himself a place in the pitching rotation.

Baseball isn’t new for Konrad though, as he has been playing since he was three years old. His 12 years of baseball experience has prompted him onto the JV team despite his age difference.

“Although I may be the youngest on the team, I feel that my commitment to the sport has helped me gain some leverage compared to some of the other players on the team,” Konrad said.

Bohnert has been “all in” his whole life for baseball and has had his twin brother by his side the whole time. Freshman Derek Bohnert plays baseball as well but had a horrible season-ending injury as he broke his leg sliding into second base. Derek has been very uplifting for his brother as he gets ready for the season.

“We have always pushed each other to be better, and I hope Konrad has a great season and is able to shine and showcase his outstanding abilities,” Derek said.

Konrad’s position as shortstop requires an important leadership role as they must communicate to the team and verbally encourage others during the game. He does not mind this role and feels that it fits him best.

“I’ve always loved playing shortstop as it enables me to take a bigger role on the team and make sure the team knows what to do if they get the ball,” Konrad said.

Teammates are taking notice to Konrad’s abilities and love what they are seeing out of him. The team has only played around five winter ball games so far this season, but many see signs of leadership.

“Konrad has done a great job leading our team and getting the most production out of the players,” sophomore Zach Frankenburg said. “I think he will be leading whatever team he’s on for the next four years of high school and really make a difference on the team.”