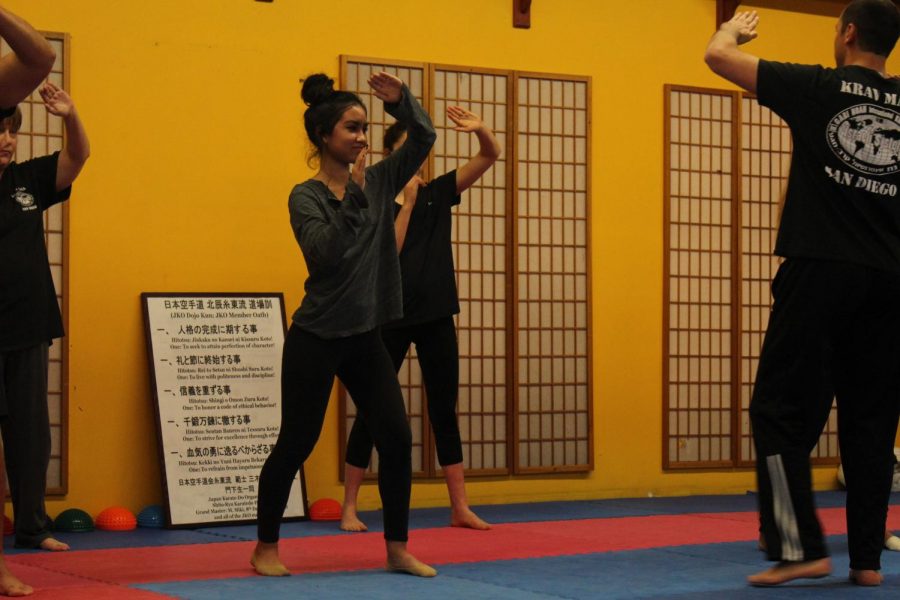 A sport that prepares people for the spontaneous dangers of the world, self defense provides people with a sense of safety, as well as an enjoyable way to spend their time. Students express how martial arts have improved their lives, as they reflect on their personal experiences with the discipline-inducing sport.

A common form of martial arts is karate, proven to be an activity that benefits people of all ages.

“I started doing karate when I was eight years old,” junior Matt Krak said. “I got into it because I thought it would be a useful skill and a sport that not that many people did.”

Eight years later, and Krak has recently volunteered as an instructor for kids at the North County Martial Arts’ summer camp. As he viewed martial arts from a whole new perspective, Krak was inspired to take initiative for teaching kids the skills he found beneficial when he was their age.

“I had no supervision with me,” Krak said. “I was the person in charge of 20 kids at a time. It puts a lot of pressure on you to make sure they stay safe and that they’re still having fun.”

The motivation to teach others martial arts was initially derived from Krak’s years of practicing the sport himself. As the fundamental principles necessary for self defense influenced his character, Krak was prompted to redistribute these benefits back into the community.

“What made me start doing martial arts as an instructor was to try and give back to the studio that had given me all these beneficial character traits like being confident, responsible and making me more diligent in my work,” Krak said.

However, karate is not the only self defense practice that offers a positive influence in people’s daily lives. Another form of self defense is Krav Maga, originating from the Israeli Defense Forces. With this activity, even newcomers instantly learn multiple tactics that teach how to strategically avoid dangerous scenarios in real world situations.

“In Krav Maga, you get straight into it, but I think it’s important for people to know how to protect themselves and learn these skills from a young age,” sophomore Christine Apostol said. “Dangerous situations, especially in this day and age, are everywhere. If these situations were to happen to me, I’d be able to defend myself.”

Even though self defense is very useful, techniques can only be developed with consistent and long term practice.

“I plan on continuing self defense classes for many years to come, especially before I go off to college,” Apostol said. “If I practice the motions a lot then they become habitual. If I were in a dangerous situation, my body would just react instinctively.”

Evidently, practice after practice for martial arts develops those skills, so much so that they become a natural part of you. Because of this, people view self defense as a constant and reliable aspect of their lives.

“I don’t know what I’m going to end up doing for college, but karate is always a good skill to have, and if it comes to it, I can always fall back on it,” Krak said.