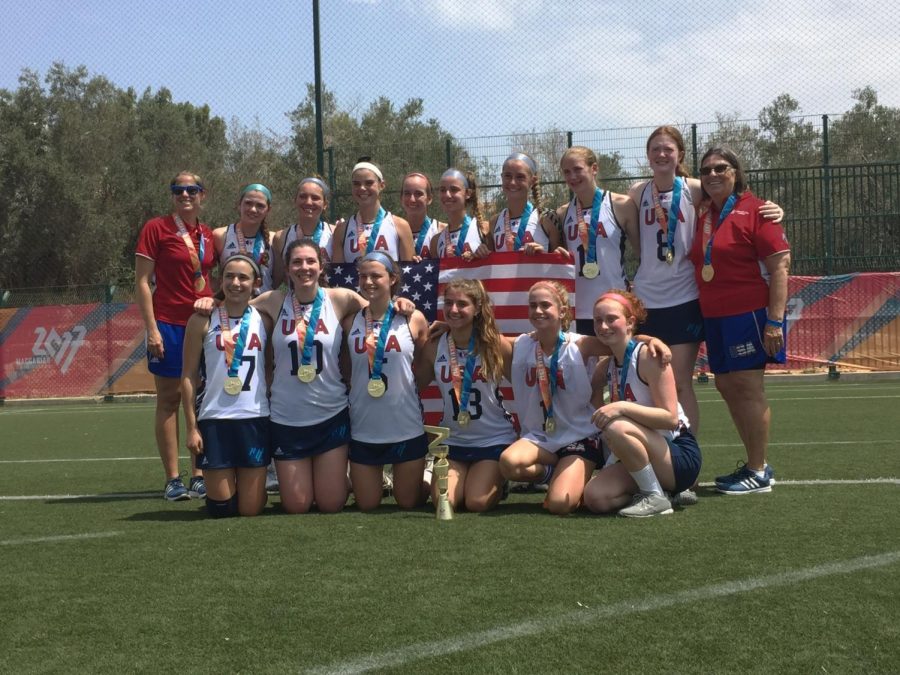 Girls from all over the United States play in the 2017 Maccabiah Games and win gold medal for lacrosse.

This past summer, senior Drew Kesslin went on a trip to go compete in the Maccabiah Games for lacrosse. The Maccabiah Games is the Jewish Olympics, which takes place in Israel. Kesslin played with girls from all over the United States against other countries and, in the end, they brought home the gold.

Kesslin played lacrosse outside of school when she found out about the Jewish Olympics. She did not only work hard during the school practices, but she also pushed herself on her own to achieve her goal.

“I practiced outside of my practice from school and I tried to do some work outs and play wall ball to prepare me,” said Kesslin.

Once Kesslin flew herself out to Israel, she got to meet her team for the games for the first time. Kesslin knew she had to get close with her new team in order to do well playing lacrosse, even though it was different at first.

“At first it was really weird being thrown into such a unique situation, but once we all became comfortable with one another it was super fun and enjoyable,” said Kesslin.

Talia Trakman was one of Kesslin’s teammates during the games who goes to a Jewish private school in San Diego. She was one of teammates who lived closest to Kesslin and enjoyed to play with her.

“I like playing with her because she never gets frustrated and always gives you good advice to help you advance as a player,” said sophomore Talia Trakman.

Trakman saw Kesslin as very motivational person and believed she helped the team for the better.

“Even when it wasn’t her best day, she gave it her all and didn’t let anyone or what they had to say get in her way,” said Trakman.

The games were fun to play and made new friendships to the team, but from time to time it got difficult on and off the field.

“The hardest part was the first few days when it was all new and none of us knew each other and the weather at our practices were unbelievably hot and humid,” said Kesslin.

The Maccabiah Games had changed the young girls lives and gave them an experience of a lifetime.

“I always take any opportunity I can to make new memories and try something new. I also wanted to go back to Israel, love playing lacrosse and wanted to make lifetime friends. Plus it is a whole competition against Jewish athletes, which is really amazing,” said Kesslin.