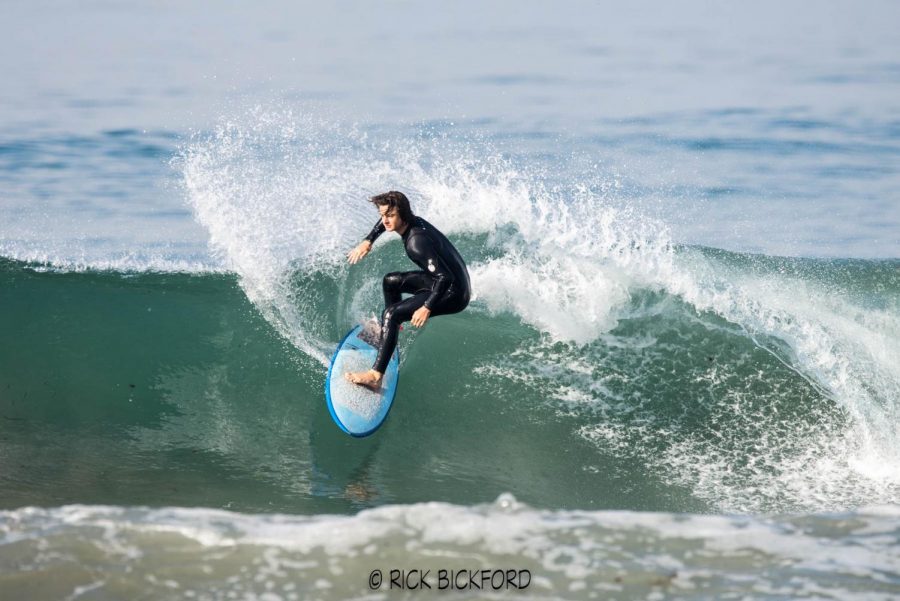 Sophomore Sam Wardlow catches a wave. Wardlow is a member of the surf team.

Professional athlete and surfboard designer Tom Blake once said, “Surfing leads you through life, especially when you’re young and with hope in your heart.” Especially in Southern California, it is common for surfing to become more of a lifestyle than just a sport, and with Carlsbad High School’s surf team bringing competition to the ocean, many students have been getting into this lifestyle at a young age.

Sophomore Sam Wardlow exemplifies the typical young surfer’s lifestyle as he and the rest of the surf team prepares for future contests. However, Wardlow has been consistently hitting the beach long before surf season started.

Still, this consistency is not only done individually. During practices, the whole surf team spends time freestyle surfing, as well as running practice heats. So far this season, the team’s time commitment and dedication has been paying off.

We’re looking to individually do better, and as a team, do better than the other schools”

“[We’ve been] practicing and preparing for contests,” Wardlow said. “We already had two contests, [and they were] good.”

With the multiple years’ worth of surfing under his sleeve, Sam has developed a true skill that seems to be a major aspect of his life. Him and his teammates use the skills they have developed to help each other out at contests, despite surf being more of an independent activity.

“[I try to] block other people and catch the best wave,” Wardlow explained. “Sometimes [my teammates and I are] in the same heat together so it pushes us [because] we can help each other out.”

Wardlow and his teammates have created a surf team that dedicates an abundant portion of their lives and amount of time to the sport. The success surf has achieved has been due to their strategic team cooperation, as well as their desire to keep improving from where they are now.

“We’re looking to individually do better, and as a team, do better than the other schools,” Wardlow said.