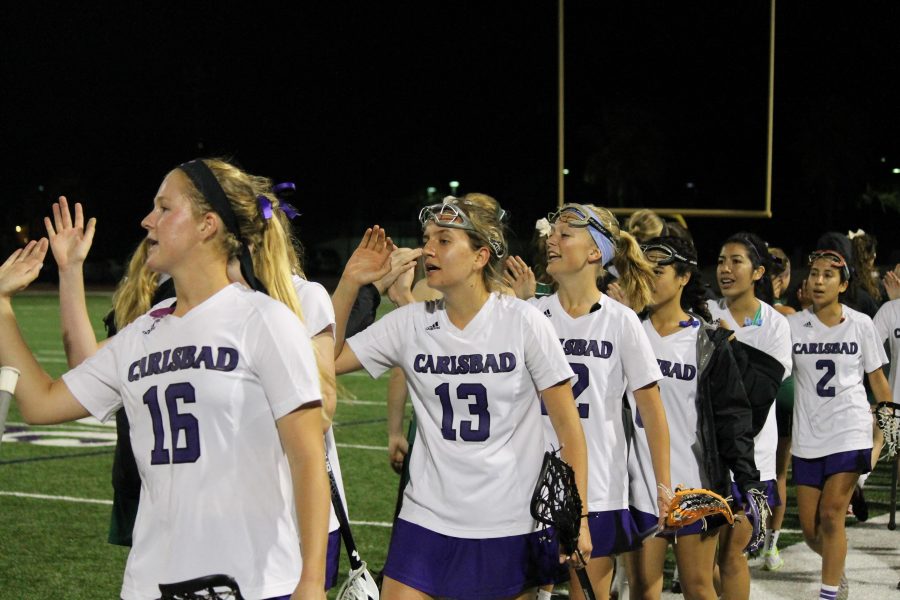 The Carlsbad girls lacrosse team played their second round CIF game on May 12 against Del Norte. Del Norte played as the visiting team as the Lancers defended their home turf.

After beating the third seed Rancho Bernardo, the Lancers went into the semi-final as the sixth seed in division one, versus the seventh seeded Del Norte. The Lancers came out with the goal of attending the championship for the second consecutive year.

“The game was a whirlwind of emotions, I think we played really well,” junior Riley Skachenko said. “We definitely have to work on some stuff before our final game, but I believe that we can come out with another win.”

The game started and the Lancers were quick to go on the attack. Minutes after the first whistle blew to start the game, Skachenko scored he first goal of the game. However, Del Norte didn’t let the Lancers relax as they scored seconds later, making the score 1-1.

“I think the game went really well,” senior Madie Simpson said. “We were very connected in the transitions, I think we really played as a team and worked hard for this W.”

After minutes of intense play, and relentless rides, the Lancers were able to score their second goal. Lancers led 2-1 briefly, but Del Norte answered after a fast break down the left ally and scored, making the score 2-2.

With the first half quickly coming to an end, and the score being tied, both teams picked up the intensity and played incredibly hard. Lancer senior Delaney Benson created a fast break as she cleared the ball after Del Norte fumbled, resulting in another Lancer goal by junior Mackenzie Frost, with five minutes left in the first half.

“The team did really well, I am so proud of all of them,” Simpson said. “We all worked really hard both individually and together, we just gave it our all.”

Del Norte was then trailing 3-2 with only minutes left in the first half. Despite their lead, and half-time coming in seconds, the Lancers amped up their play and put the pressure on Del Norte. Del Norte broke under the vicious attack and junior Maggie Sweeney scored with 47 seconds left closing the half with Lancers ahead 4-2.

“We are so proud of the girls, headed to the finals for the second year in a row, and we are looking to bring it home this year,” assistant coach Kelly Giblin said.

The second half commenced with Del Norte hungry to score. Del Norte was able to score at the sixteenth minute, closing in on the Lancers 4-3.  The Lancers ran a great offensive set with numerous shots on goal, none scoring though. Finally, Skachenko scored, increasing their lead to 5-3.

“It feels good to see all of the girls hard work pay off, we purposely played the best teams in San Diego so we could prepare for playoffs. We are looking forward to it,” Giblin said.

Del Norte’s offense turned on the afterburners after realizing they were down two points with only minutes remaining in the semi-final game. Del Norte scored their fourth goal, making it a one point game. Del Norte, capitalizing on their momentum, managed to score another goal at the ten minute mark, tying the game. In response to Del Norte’s goal, Sweeney picked apart the Del Norte defense and scored Carlsbad’s sixth and final point. The lancers won 6-5. On May 14, the Lancers took on Scripps Ranch in the CIF San Diego Section Division One championship. Challenged by a quick offense and relentless goalie, the Lancers came up short, losing the title game 14-7.

“At the end of the day, our team preformed like winners,” Skachenko said.