Girls lacrosse takes on LCC and comes up short 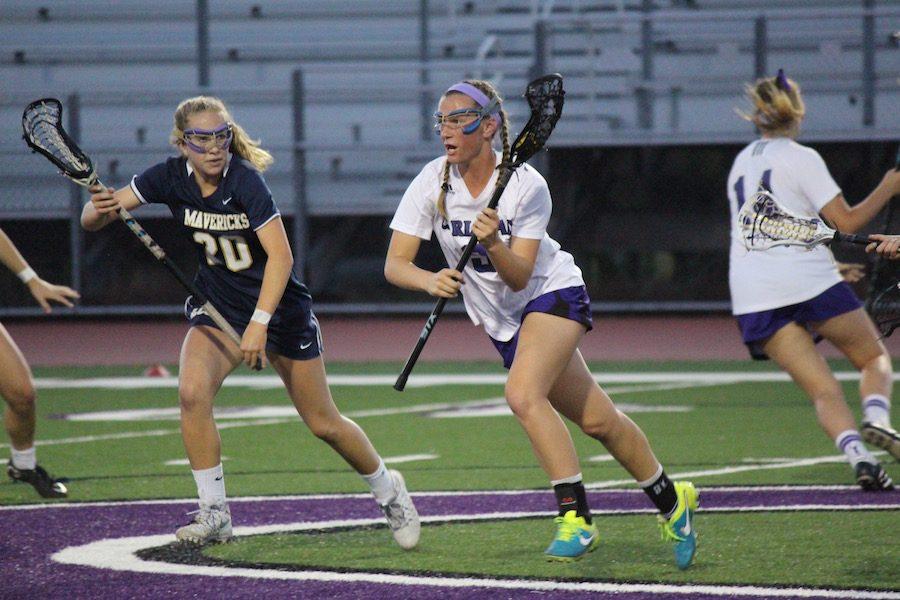 After gaining possession of the draw, Delaney Benson (12) rushes down the field,putting the Lancers on offense. Tues. Apr. 9 Carlsbad's varsity women lacrosse went head to head against their local rival, LCC. The final score was 2-12 Mavericks.

With an overall record of 6-5 before their game on Tues., April 19, the Carlsbad girls varsity lacrosse team was looking to grab a win at home against La Costa Canyon. The Mavericks were tough opponents, and the Lady Lancers were looking forward to a hard fought game.

“We focused a lot on mental preparation more than anything leading up to the LCC game,” senior Natallie Rocha said. “They are a really skilled team who have won CIF for the past four years so we knew we would be in for a gritty battle.”

The game started out with an early Mavericks goal, but the Lancers responded strongly and drove forward offensive pressure. They were able to attempt some strong shots, but the LCC defense held up.

The Mavericks scored again on a counterattack and this goal swayed the momentum from Lancer to Maverick domination. One minute later, LCC netted another goal, making the score 0-3 after 15 minutes in the first half. The Lancers were pitted down defending for most of the half, as LCC kept up their pressure and dominated the Lancer defense. Carlsbad were able to bring some strong offense on their own, but a swift Maverick counterattack resulted in another goal, making the score 0-4.

After a Carlsbad time out, LCC maintained their offensive domination and were able to score three more times before the end of the half. The Lancers came out of half time looking to gain some ground on the Mavericks’ large lead.

Similarly to the first half, LCC scored quickly after the start of the second half and the Lancers found themselves mainly defending for the rest of the game. Despite a few unsuccessful counterattacks from the Lancers, the Mavericks netted another two goals, making the score 0-11.

The Lancers were able to capitalize on their counterattacks when Mackenzie Frost scored twice in three minutes, helping the score move to 2-11. The Mavericks scored once more before the end of the game, and the matchup ended with a score of 2-12. Despite the score, the Lancers don’t want to dwell on their performance.

“We used that game as a learning experience for how we can improve our field urgency and transitions from defense to offense,” Rocha said.

The Maverick offense was relentless, but Carlsbad’s defense was able to withstand multiple LCC attacks and gives the team something to be proud of.

The Carlsbad versus LCC rivalry has been something that drives a lot of passion on both ends for years. This latest episode gives the Lancers motivation to come back and dominate in the next matchup.

“As a whole, our school always wants to beat LCC but for us its even more personal,” Rocha said. “We really do look forward to playing them any chance we get because it only raises our game each time.”