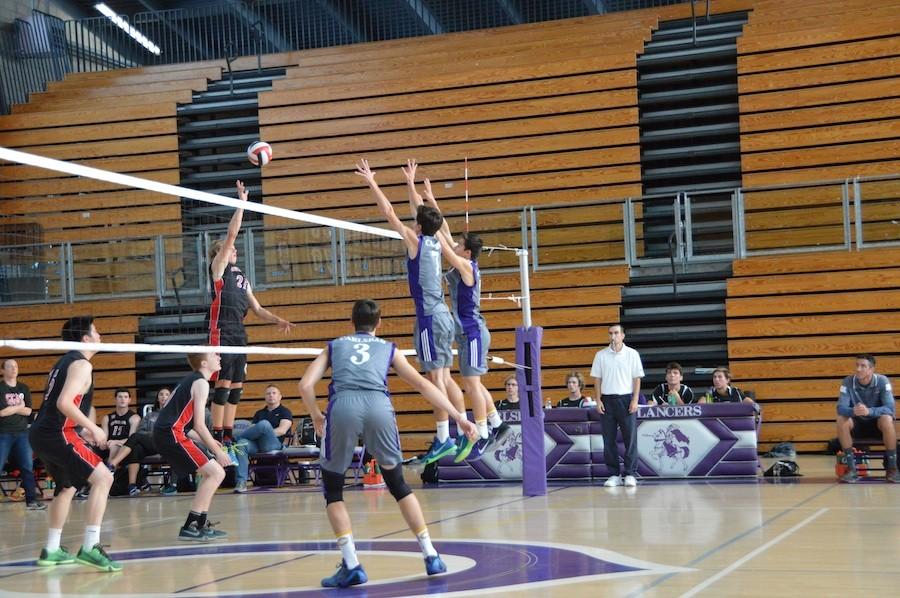 Senior, Jake Stevens, and junior, Jack Goedken, defend their side against Canyon Crest Academy on Tues. Mar. 22. The Lancers defeated the Ravens, the score coming to 3-0.

After a strong season last year, boys varsity volleyball is ready to dominate their league for the 2016 season. They are putting in the effort towards winning CIF, and so far, their season has gone in the right direction.

“Our season started great,” senior Grant Holve said. “We are undefeated in our matches and have won a tournament.”

On March 22, the team hosted the Canyon Crest Academy Ravens and were able to cinch a win.

As the first set began, the two teams were pretty evenly matched. The Lancers, however, were able to maintain a small lead throughout the set. Carlsbad’s teamwork provided them with a visible advantage, as a few series of miscommunication by Canyon Crest Academy left them trailing behind during the set.

The Lancer’s intelligence and dominant skills allowed them to pull ahead 22-13.

CCA slowly started to put together a run and was able to pull the score to 23-16, but Carlsbad scored two points in quick succession and won the first set convincingly.

Similar to the first set, the two teams were fairly balanced score-wise as the second set began, but Carlsbad soon dominated the game. The Lancer’s strong serves and dominating skills allowed them to pull ahead by a significant margin. CCA took a timeout to try and slow the Lancer’s scoring streak, but Carlsbad maintained their dominance and took the score to 17-6.

Carlsbad’s continuous strength on the court and valuable cooperation made the score a convincing 22-14. The Lancers closed out the second set comfortably, 25-15.

In the third set, CCA contended the strong communication between the Lancers with resilience, and tied the score at 6-6. The Ravens were able to pull ahead by one point, making the score 8-9.

The score tied up again at 12-12, prompting a series of Lancer domination. Carlsbad soon pulled ahead to 19-16 and were able to close the third set out with a score of 25-19.

While this win may seem easy, the Lancers are always looking to progress as a team.

“We need to improve on being more consistent and finishing the game when we can,” Holve said.

The team is focused on all aspects of their game in the hopes of achieving their goals.

“Our whole goal for the season is to win CIF,” Holve said.