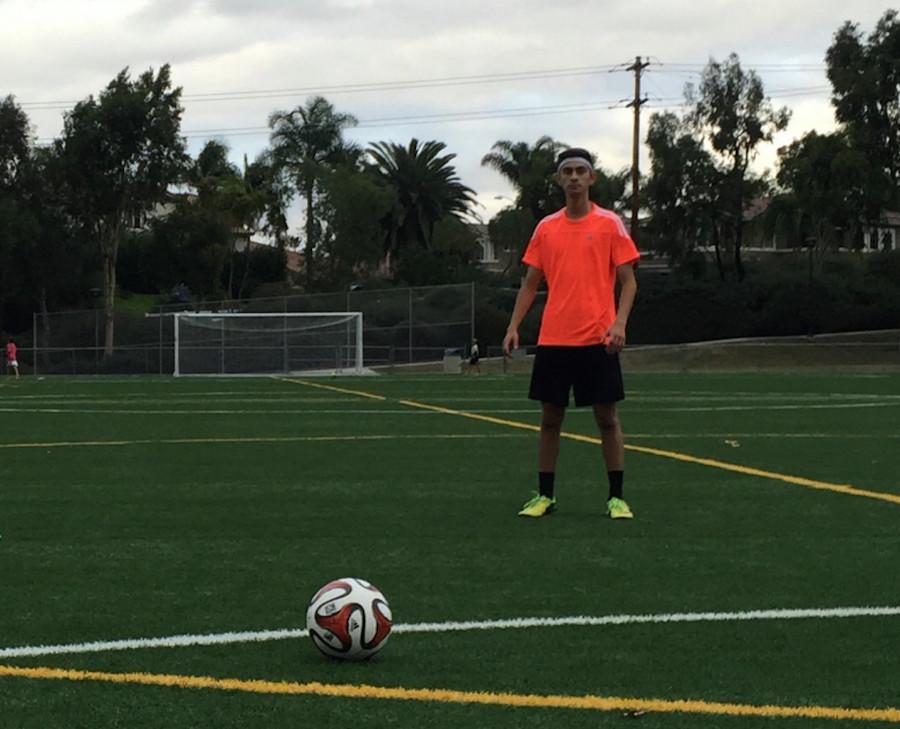 Senior Badr Suleiman prepares to kick the soccer ball. Lately, soccer has been becoming increasingly popular in the United States.

With FIFA 16 coming out soon, as well as the transfers of famous soccer stars to the MLS, soccer has recently had a major upswing in popularity in the U.S.. Carlsbad High has become one of the latest hit by the soccer phenomena.

Starting in May, a group of students at CHS assembled a recreation soccer league. It began with teams Volcano Tacos Football Club and REWQ FC, with teams Kosher and Chocer FC joining in later as expansion teams. The league’s uniqueness begins with the fact that most of the kids on each team have never played competitive soccer–only two players per rec team play for CHS or Club soccer. Matches are usually sporadic, taking place whenever the players are available. Three of the four teams have gone as far as getting team jerseys to make the league as official as possible.

“It’s cool to see how involved people really got in the league,” senior Spencer Stone said.

The league came out swinging with the inaugural match back in May taking place between the VTFC and REWQ FC. REWQ took the opener by a score of 4-2.

“The first game was an absolute blast, and it’s still probably my favorite game that we’ve played in so far,” Stone said. “It was against some of our good friends and the intensity was high.”

The game seemed to be popular amongst most of the team as it proved one of the most memorable moments of the season.

“I thought the game was fun and exciting because it kicked off a fun season,” senior Coleman De Pretis said. “It was also really cool to score a goal in my team debut.”

“It’s fun to dominate and compete with some of your good friends,” Horan said.

The future appears bright for the league. Its collection of unique individuals will be returning to the field soon, with a match between VTFC and Chocer FC expected within the next couple weeks. When asked about the plan of attack that VTFC will use in order to get the franchise’s first win, senior midfielder Badr Suleiman responded: