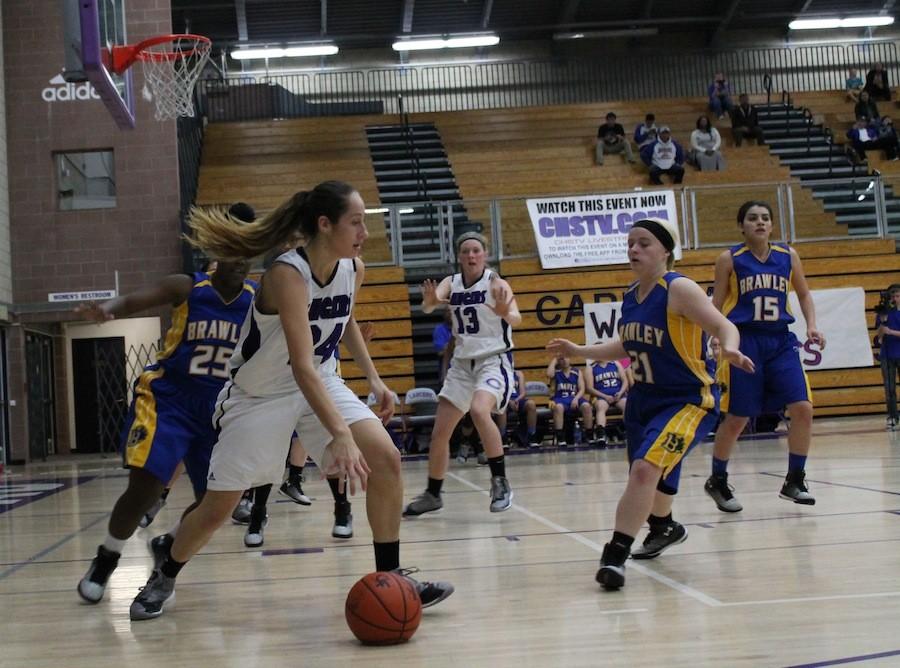 Senior Julia Madrid dribbles down the court against Brawly High School on Feb. 25, 2015. This is Madrid's fourth year on the varsity team.

Carlsbad’s girls basketball team continued their successful winning streak on Wednesday Feb. 25, by defeating Brawley High School with the final score 49-25 making their record 18-9. This win in the first round of CIF playoffs put the Lady Lancers into the quarterfinals of the San Diego section division two basketball, which has not been done since 2012.

To prepare for the playoff game the team had intense practices all week. Additionally, the team held a team dinner the night before. Having the extra time together to bond allows them to learn more about each other, which in return helps on the court.

“As a team, a majority of us have been playing together for a long time, so we are able to trust everyone,” senior captain and starting center Julia Madrid said. “Half the team has been together for four years, so we have all grown really close and therefore play well together because of experience. Doing things like team dinners just helps strengthen our chemistry and I think it really shows on the court too, I would say it has worked out well this season.”

The combination of sound defense, patience on offense and ball movement, contributed to the Lancers success. When the Brawley Wildcats scored, the Lady Lancers rebounded and stayed focused on the next play.

“There was not one play or moment that was extremely special, but that was because we played well as a team the entire time,” Madrid said. “Our guards, hit a few threes which was gave us some momentum.  Also our team played really great defense against Brawley. We hustled after the ball and stayed up on the opponent, which makes it hard for the other team to score.”

The loud crowd support additionally helped the Lancers win and they hope that everyone will come out and support next game. With the win under their belt the team recognizes they have another tough game ahead and automatically pushes to improve by hitting the gym the following day for practice.

“I think we have a good chance to win this next game against Santa Fe Christian,” Madrid said. “Hopefully we come out with a win. We played them earlier in the season and lost, but several teammates were sick and we did not play our best. Last time, we only lost by eight points, so I think we have a good chance at winning. The game is at 7 in Santa Fe Christian’s gym on Saturday.”