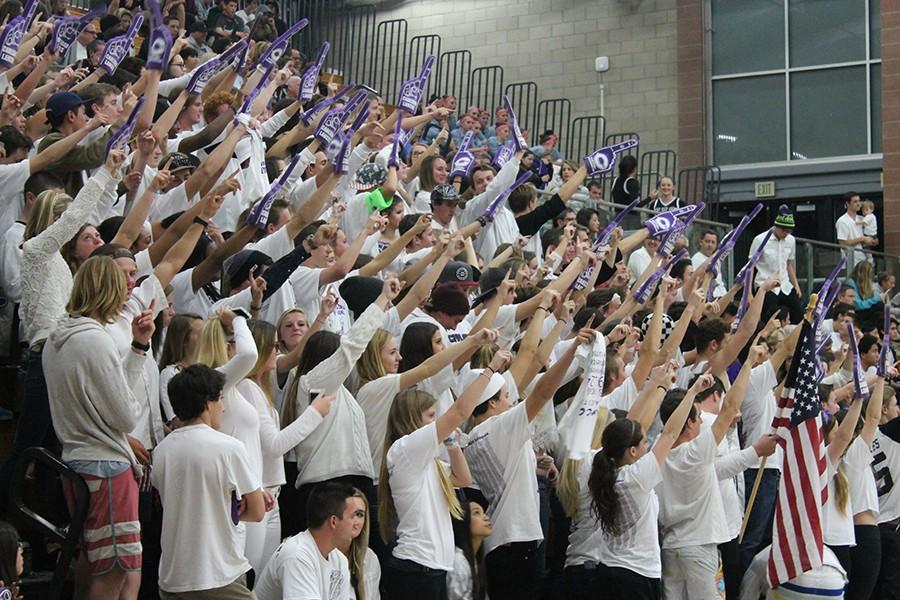 Friday Feb.6 was the hire annual basketball white out game. The crowd dresses in all white and stays completely silent until the 10th point.

Boys varsity basketball took on the Vista Panthers on Friday, Feb. 6 night in the coveted “White-Out Game”, ultimately losing the match 38-74. In this third annual “Silent Night”, the loud crowd gathered in all white attire and stayed silent until the Lancers scored their first ten points.

The first quarter began with Carlsbad winning the tip-off, followed by Vista capitalizing on a few Lancer turnovers to score some quick points early in the quarter. The Lancers fought back after the slow start, reaching their 10th point about six minutes into the quarter. The silence finally ended as senior Will Burke scored the tenth point on a layup during a break-away play, sending the crowd into frenzy.

“I didn’t expect it to make that kind of a shock but it definitely got me pumped. The Loud Crowd really got into it and fired us up throughout the game,” Burke said.

The energy from the crowd would ignite the Lancers offense on a small run before the end of the first quarter to close the deficit to ten, score 14-24 Vista.

Nevertheless, Carlsbad’s offensive woes would return in the second quarter with the Panthers going on another scoring run. The quarter came to a close with the Lancers facing a large gap going into halftime with the score 21-40 Vista.

“Our energy and intensity wasn’t there and our defense was struggling,” Senior Anthony DeRose said. “Overall, we just need to improve on the defensive end of the ball and keep working hard in practice.”

Friday night saw Carlsbad students, parents, faculty and alumni alike, all came together for the highly anticipated night. The halftime show included performances by the Varsity cheer team alongside their young cheer campers, as well as the nationally ranked Lancer Dancers. More than just a game, the new “white out” tradition has become yet another staple of Lancer pride in the community.

With the second half underway, the Lancers attempted to pick up the pace but couldn’t seem to shake the problems they experienced in the first half. On the other end, Vista continued to dominate offensively with quick breaks and plenty of long shots from beyond the arc. With the score 29-55, Vista continued their momentum into the fourth and final quarter.

“Our shots just weren’t falling tonight, but next game we are going to try to focus more on our defense,” senior Matt Mulienburg said.

While the Lancer offense picked up toward the end of the fourth quarter, it wasn’t enough to reach the Panthers.The final score of the game was 38-74 with Vista taking home the win.

Looking past the loss, the Lancers try to use such setbacks to build upon their overall game, taking note of any improvements they can make down the line.

“We have to be faster on our feet, communicate better and do more of the little things,” Burke said. “We can do it, but it’s going to take a big effort from all of us.”