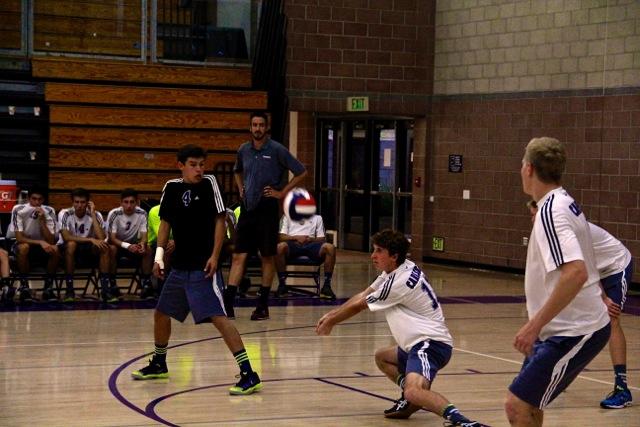 Conner Bently passes a ball on serve receive while Emillio Bunnel and Jakob Karrlson support him by being ready. This is Bently's third year on varsity and the team's first appearance in state playoffs.

History in the making; the boys volleyball team made it to state for the first time ever. After the volleyball team had made it to CIF finals and were the runner ups they still had a shot at state. In the quarterfinals the boys played Redondo Union High School.

“To prepare we practiced as a team and on individual skills and we also had a team get together,” junior defensive specialist Conner Bently said. “It was great going to CIF alone, because we are the third Carlsbad mens volleyball team to make it that far, and then to play in states was mind blowing. As for actually playing I was nervous then eased into the game thanks to our loud crowd.”

Regardless of the loss in CIF the lancers fought on and went right back into practicing to prepare for state. To make sure they were ready they even had practice on Memorial Monday. While a majority of us were at the beach relaxing, they were in the gym preparing to make fellow fans proud.

“The team we played was ranked number three in the nation and number two in the state, so going into it we knew that it was going to be some tough competition,” junior libero Emillio Bunnel said. “Overall to say we were nervous but we fought pretty hard and stuck with them for all three games.”

Throughout the game Carlsbad demonstrated determination and ended each game with close scores. As for the downfall in the second game the volleyball team gave it away to one jump server, which allowed him to get several aces (serving points) in a row. Needless to say the Lancers competed with a nationally ranked team and went further than any Carlsbad student could have expected.

“It was a unique experience and thought it was great to be on a team that can make it to state,” senior middle blocker Declan Savage said. “Not many people can say they were on a team that went to state, or even runner-up in CIF finals. I was able to contribute to the success of the team regardless of my playing time.”