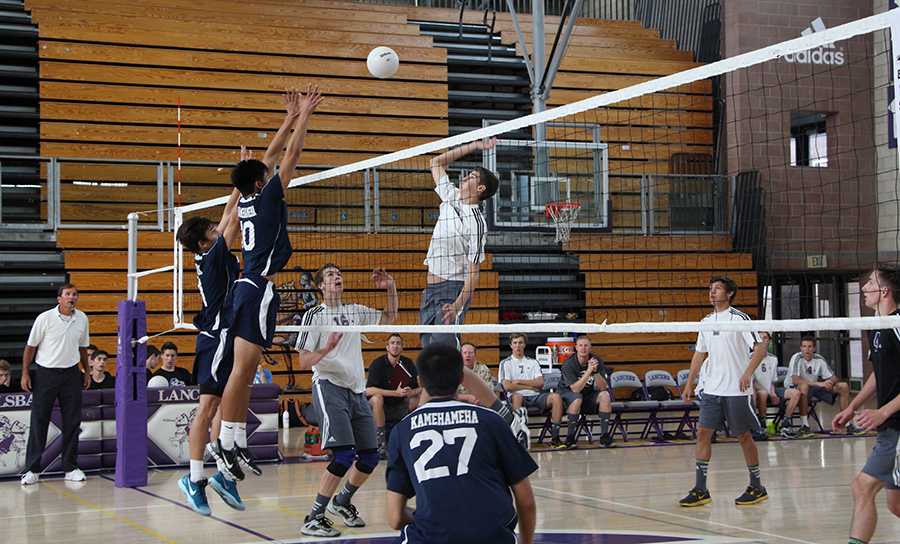 Senior Taylor Bloomquist goes up for a kill during his game against Kamehameha. This was the Lancers first game of the season. They won after the fourth game.

For the first time in two years, the boys varsity volleyball team took on a top team from Hawaii, Kamehameha on Mar. 18. At their last meeting two years ago the Lancers lost after five sets, however this year Carlsbad came out on top after only four sets, establishing their dominance early on in the season.

“It was my first game back all season and it felt really good to play the number two team in Hawaii and show what our team is bringing to the plate this season,” senior Jakob Karlsson said. “The improvement we’ve seen from last season to this season is huge and we are excited to play more high competition and bring some more wins to Carlsbad.”

The Lancers swept the next set with a lead of 25-18. While in the fourth set, Carlsbad came back from a deep 23-16 deficit and ended up winning with a score of 28-26. Carlsbad defeated the number two team in Hawaii in only four sets, giving them momentum for the rest of the season.

“The season is looking really good, we have a great lineup and a team of really experienced players which will help us go far,” junior Emilio Bunnell said.  “We had a slow start in the first tournament, Best of the West, where we played really hard teams. But when we beat both Kamehameha and Mission Hills, we got our confidence back.”

The volleyball team moves on with their (3-4) record to take on Poway on Mar. 25 and Torrey Pines, the number three team in San Diego, on Mar. 26.

“We have coaches who condition us a lot and have us playing 100% everyday so that we are ready for the high intensity games we have coming up this season,” senior Taylor Bloomquist said. “We are all really pumped to play the teams around here in San Diego so we can see how we rank and what it will take to win both CIF and  league, which is the main goal for this season.”