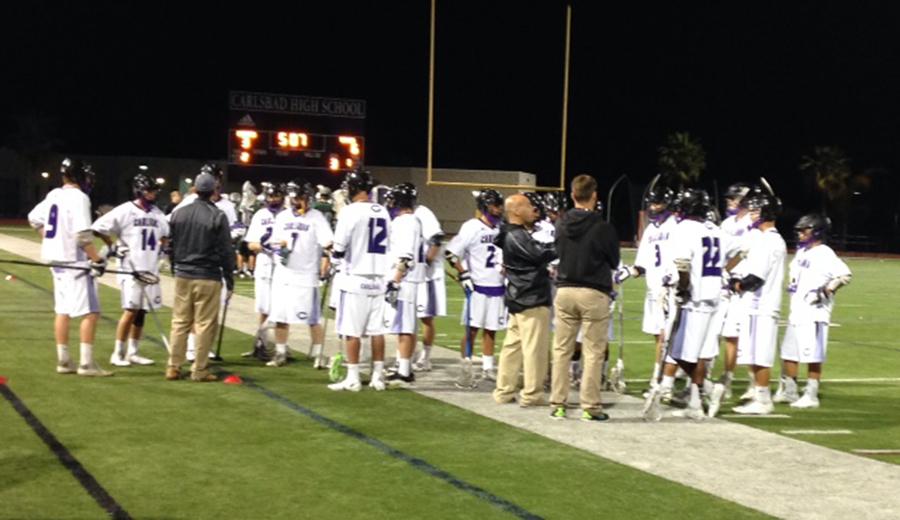 Mens lacrosse players bring it in for a timeout huddle at the game Friday. Lancers lost 9-6 to Poway High School.

After a tough loss in the CIF finals last year, boys lacrosse started this year’s season off with a quick 4-0. This past Friday Mar. 21, boys varsity lacrosse took on the Poway Titans. The Lancers had never beat the Titans in a regular season match before, so there was a lot of pressure on this game.

The game started off quickly with Poway scoring the first goal, but a Lancer goal from #15 Christian Bosely responded minutes later. The majority of the game was spent on the defensive side for CHS. Goalie Thomas Soetart had multiple saves but the forwards for Poway were relentless. They scored four times in the first half compared to the Lancer’s two goals.

In the second half, the two teams just started to trade goal after goal with one another. Spencer Beyer put the first goal of the second half on the board but the Lancers couldn’t hold their momentum for very long, as the Titans marched down the field again for the quick goal. Then Poway had their way with the Lancer defense by scoring two more consecutive goals. The score was now 7-3 the Lancers trailing at the end of the third quarter.

Carlsbad attempted some fourth quarter heroics and tried to comeback from this deficit with two goals from Mac Harden and Teagan Willes. Yet to the Lancer’s avail, Poway showed no signs in letting up scoring once again. Mac Harden trying to breath some life into the Lancers scores with under two minutes to play score 6-9 Poway. They held the lead against the Lancers and the final score was 6-9 Lancer defeat.

A game where the Lancer defenders were forced to be on their toes the entire game, they managed a respectable showing for how many shots on goal there was and the amount of time the Titan forwards held possession for.

“Our defense left their hearts on the field, and our offense had some great shots and goals but it was a tough game and we look to bounce back next time we play them,” junior defender Dietrich Von Kaenel said.

The Lancers had trouble maintaining the intensity of the Titans. At times the Lancers were trading goals with Poway, but at certain points couldn’t keep up with the onslaught of shots by the Titan forwards.

“It was a bummer that we lost because we know we could have beat them if we played how we normally play like we did in the fourth quarter,” junior forward Mac Harden said.

The Lancers play again this upcoming Saturday Mar. 29th against Air Academy from Colorado, who has made the trek to San Diego in hopes of finding some good competition on the west coast.