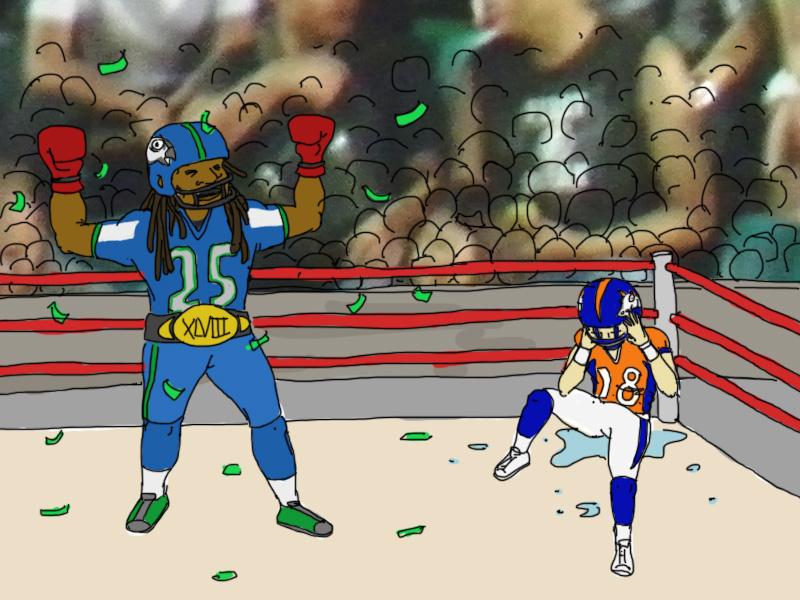 Super Bowl Sunday, considered an American holiday and the perfect day to over eat (even more than Thanksgiving). Feb. 2 had the (1) Seattle Seahawks and their No.1 defense taking on the (1) Denver Broncos and the No.1 offense in New York. The pre-game ceremony was big and emotional, as the NFL hoped it would be.

Then the game started. On the first possession and play of the game Broncos center snapped the ball over Peyton Manning’s head, as the ball rolled into the end zone. Running back Knowshon Moreno was able to recover the,yet it was still a safety for Seattle.

The play foreshadowed what was to come for the rest of the game. In the 1st quarter the Seahawks were able to tack on two field goals. Denver wasn’t able to get a first down the entire quarter.

Seattle had scored 14 in the second quarter, intercepted Manning and held the Broncos scoreless in the first half where the Seahawks were up 22-0.

Bruno Mars was the Pepsi Halftime preformer this year, with special guests, the Red Hot Chili Peppers. Mars came out with a crowd electrifying drum solo. Mars went on to preform his most popular songs, like “Locked Out of Heaven.” Anthony Kiedis, Flea and the rest of the Chili peppers came out to play fan-favorite “Give it Away” with Mars providing vocals as well. Mars and RHCP put on one of the better shows in recent history.

On the very first play of the 3rd quarter Seattle’s wide receiver Percy Harvin sprinted for a 87-yard touchdown return, separating the Seahawks from Denver 29-0. Seattle’s defense was able to hold Denver at 0 for most of the 3rd quarter before Manning threw a strike to receiver Demaryius Thomas, who reportedly played with a seperated shoulder. The Broncos were finally able to get on the board but were down 36-8.

Seattle scored another touchdown to put the lead at 35. Seattle’s defense absolutely shut down Denver and eventually won the game 43-8. The games MVP was Seahawks line backer Malcolm Smith who retuned a interception for a touchdown.

This was Seattle’s and the 12th man’s first Super Bowl win. Though Manning won his 5th season MVP, the loss puts Manning at 11-12 in the playoffs, and Denver at 2-5 in the Super Bowl.