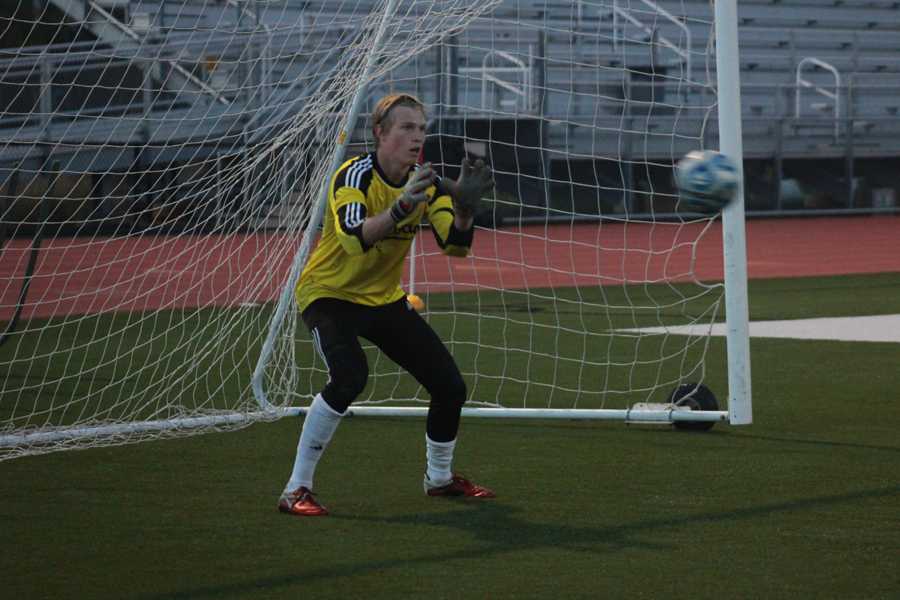 Senior Jakob Karlsson, a new addition to the varisty soccer team, warms up before a home game last Friday. Despite his lack of previous exposure to the sport, Karlsson has quickly caught on and continued to improve with help from coaches and team mates.

Every once in awhile a true underdog story makes headlines: “Linsanity” in 2011, Tim Tebow and the Broncos’s 2011 season, and the Detroit Pistons defeating the Los Angeles Lakers in 2004 NBA finals. This new men’s soccer season brings in a new underdog story: Jakob Karlsson, who never played a minute of competitive soccer in his life, tried out and made the varsity soccer team.

“I kind of learned the sport a little at Poinsettia Park on Wednesday nights with all the soccer players,” Karlsson said. “I heard coach Ric would allow one player on the team that hadn’t played before and Matt La Bounty really motivated me to step my game up and try out.”

Karlsson, despite his apparent lack of soccer experience, made the cut and earned himself a spot on the team as backup goalkeeper.

“During tryouts I didn’t really know the rules of soccer, but I was out there trying to hold my own and just impress the coaches with what I did know,” Karlsson said. “I guess the coaches liked what they saw.”

Karlsson’s teammates have nothing but praise for him and believe he brings several winning qualities to the team.

“He’s supportive, motivating, a good athlete who can do pretty much anything, and he makes practice a good time,” teammate Colin Morrison said. “On top of all of this, his height and good looks are sure to catch opposing teams off guard.”

Karlsson has been putting in work every practice with starting goalie Matt Deemer and sees progress already.

“Every practice I work with Matt Deemer, who’s a workhorse, and he puts me through a pretty rigorous series of drills,” Karlsson said. “It’s definitely paying off and getting me better though. My height, jumping ability, and quickness were good starting points for me, but I can already see improvement in my blocking skills.”

With lots of progress made in such a short deal of time, Karlsson’s teammates are excited to see him improve throughout the year.

“He’s a really raw player and has some star potential,” Colin Morrison said. “I see a lot of Messi in his game and I think we’ll see more and more as he learns the game.”

In a recent win against Steele Canyon, Jakob got his first-ever minutes in a competitive soccer game.

“Coach put me in at forward late in the game and I didn’t really know what I was doing,” Karlsson said. “Emilio was telling me what to do when I was on the field and I almost had a pretty nice pass, but I think it was a turnover.”

“He looked kind of scared out there, but he got a couple touches,” Bunnell said. “He ran the field pretty well and I think he showed flashes of his potential greatness.”

Karlsson who is committed to Cal State Northridge for volleyball still wants to do well this soccer season.

“It would be cool to get a CIF ring on the soccer team and I’d like to score a goal,” Karlsson said. “Overall, I’m excited for the season and it’s pretty cool too be playing a sport for the first time on a varsity level.”