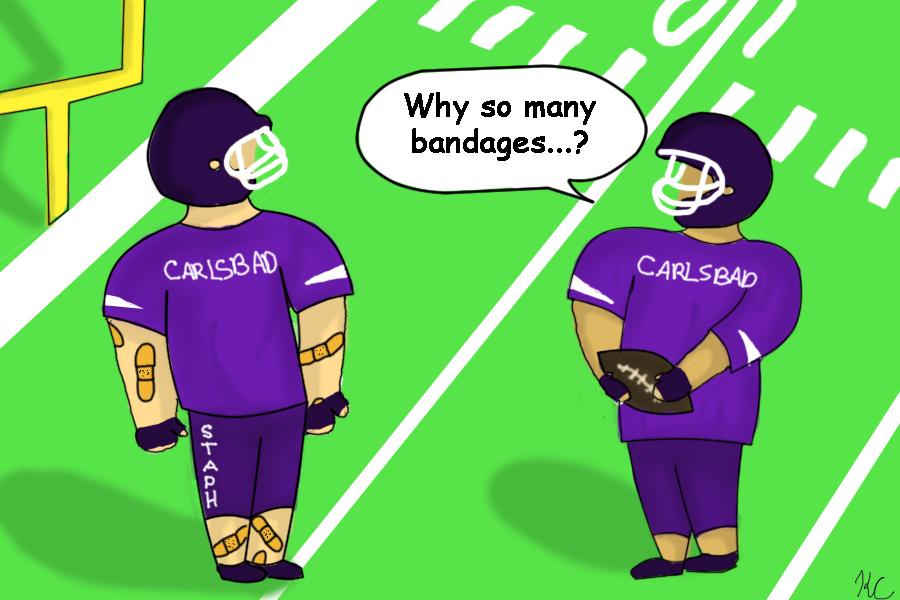 In the midst of the fantastic start to the season for the Lancers, a distraction arose when multiple members of the football team were found to have staph infections.

Staph infections are bacterial infections that can range from mild to life-threatening. With potentially severe consequences, trainer Larry Duensing was quick to assess and take care of the situation.

“There were two or three guys that came in with these lesions on there skin,” Duensing said. “It didn’t look like a normal rash so I told them to see a dermatologist or doctor and get it inspected. Obviously as a trainer I was concerned because this looked a lot more unusual than an average rash.”

“I was surprised that so many players got it so quickly,” Whitteker said. “We were concerned because there is a rule that if twenty players have the infection than the football program has to be shut down until they are cured.”

Fortunately, the number of player with the infection never got too close to twenty despite rumors of eighteen people having it.

“While there were rumors of up to eighteen people having the infection, the correct amount was about fourteen,” Duensing said.

The outbreak of staph made for a hectic atmosphere during practices according to team captain Junior Macedo.

“It was a big distraction for about two weeks,” Macedo said. “Everyone was just like ‘don’t touch me.’ There was a period of time when we were focused on the staph infection, when we could have been putting  more focus on football.”

Fortunately for the team Larry the trainer was not going to let things get out of hand and his number one concern was the health of the team.

“Everybody had to come in and everybody had to show me a doctor’s note or the medication that the doctor provided them with,” Duensing said. “That’s when I knew everything was starting to become under control. Everything was okay as long as they were taking their medication and the infection would eventually go away.”

As far as the source of the infection goes, the staff and the players shared similar ideas.

“We think it either came from the field or started in the locker room in our shoulder pads and jerseys,” junior Dylan Rutledge said.

The staff took precautions to make sure this was the last that they saw of the staph.

“After we realized it was a staph infection, they came in and disinfected everything,” captain Junior Macedo said.

The staph infection seems to be dying down and the Lancers can continue to focus  on keeping their undefeated season alive.

“At this point we don’t worry about it at practice,” Whitteker said. “Everyone tapes it up and its no longer a serious issue with the team. It was a concern for a while, but now the focus is back on football.”