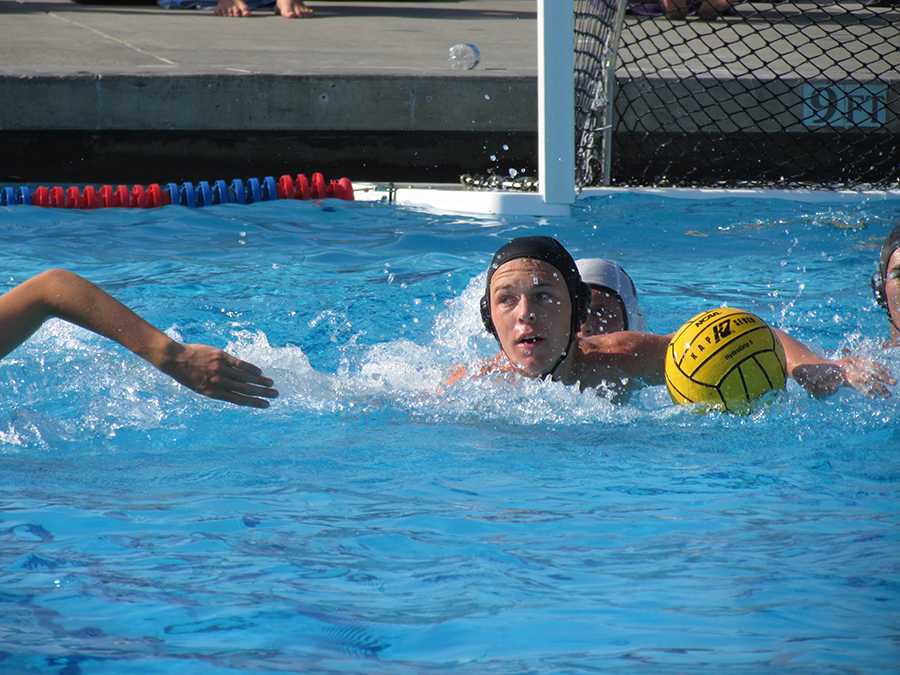 Receiving a pass from his teammate, Daniel swims down the pool to start a Lancer offensive. Transition offense played a big role against the Eagles.

While most freshmen strive to make the frosh or JV water polo team, freshman Daniel Norman has immediately made the jump to varsity.

Despite being new to not only the Carlsbad High School but the district, Daniel seems to be thriving and has earned a spot on the varsity team which is almost exclusively made up of seniors.

“I’m just really excited,” Norman said. “I haven’t been playing for very long, but I have just been training. I’ve just been trying to work as hard as possible just to try and get here because it was my overall goal.”

While everyone who plays a sport’s overall goal is to make varsity, it is already a reality for Daniel. One would assume making the cut over so many older students would give Norman a ego but he is as surprisingly humble.

“I really don’t like to say this, but it feels great,” Norman said. “I am so stoked and I don’t think I could have gotten there without the support I’ve gotten from some of the guys on the team and my family in general.”

Norman not only plays water polo at a level beyond his years; he is mature, modest and already has his priorities straight.

“I put my schoolwork first,” Norman said. “School first and water polo is pretty much a good thing to keep me out of trouble right now.”

Like any team the Varsity water polo boys occasionally lose a game, but the person hardest on Norman is probably himself.

“It wasn’t good. We lost,” he said. “As a team I think we could communicate better. We haven’t really gotten to know each other that well yet. As soon as we start to talk and learn about each other’s roles a little more, we will probably be one of the better teams in San Diego.”

The fact that Norman can assess and analyze what went wrong and what they can do to become a more dominant team is just more evidence that he is mature beyond his years, a quality that he carries with him to the pool everyday.

As a freshman who came from out side the district you wouldn’t think Norman would be aware of the high standard for Carlsbad’s water polo teams, which won CIF every year from 2003 to 2010, but Norman is already focused and has one goal in mind for Carlsbad water polo this year.

“Water polo guys, we have to win CIF,” Norman said. “We have to break this streak of not winning it and I know we have the ability as a team to do so.”