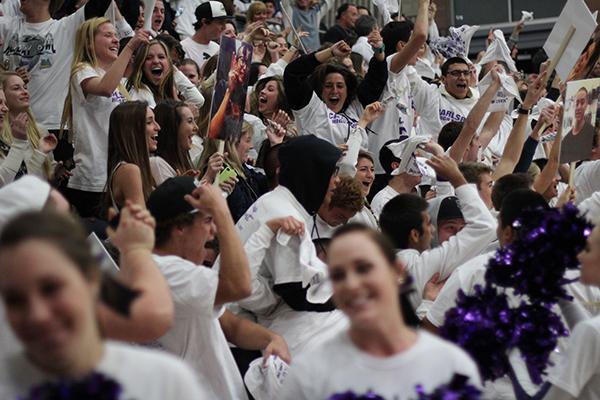 The crowd at the boys varsity basketball game goes wild after the 10th point of the game was scored. ASB promoted a White Out game and asked fans to remain silent until the boys scored 10 points.

The roar that shook Lancer Arena last Friday night has not seen equal in over a decade. ASB’s Silent White Out game could not have gone better, as our boys varsity basketball team took on the Vista Panthers for the second time this season.

Despite the heartbreaking one-point loss in over time (due in part to a handful of questionable calls, a turnover and made all the more painful as James Miller’s buzzer beater jumped out of the rim), the game can be called nothing but an absolute success.

More than a hundred people witnessed that game; here, three of them retell it from their own unique viewpoint.

Lancer Link: What wold you say first about the game?

Stumpy Kaiser: It was, without a doubt, my best high school memory. Hands down.

LL: Did you know you were going to play a big part in the crowd support? Everyone was pretty excited when you got going.

SK: Well, yeah. I really appreciate knowing I can go to any varsity game and get a front row seat, but if you wanted to give credit to someone who really got the crowd excited, give it to Ray Daou and Michael Pacanos.

LL: How were you feeling in those first scoreless minutes?

LL: How had those feelings changed when Chase dunked in the sixth basket?

SK: I have no words to describe that moment.

LL: Even more speechless than when James’ final shot went up?

SK: When that ball bounced off the backboard my heart stopped. If it had gone in we would have stormed the court -no questions asked.

LL: Any whiteout games in the future?

SK: Next Wednesday the team has their first home playoff game in twelve years. The Loud Crowd will definitely be there for silent game number two.

LL: One word to describe that game?

LL: What kind of emotions did you have going into the game?

JM: There was definitely a hype around the game, a super hype. I was anxious to see the turnout.

LL: Had you played Vista before?

JM: We had earlier in the season and beat them by two. It wasn’t as close as it seemed; we should have played a little better.

LL: What did you think of the 10 points of silence?

JM: It added pressure for sure. Even still, it was the best environment I had ever played in.

LL: The game looked like it got a little heated at points?

JM: Yeah, we got into it a little, but that’s just how it goes sometimes. I tried to keep my cool because if I hadn’t that affects my teammates.

LL: What do you think could have been done to get the win?

JM: We could have controlled the game a little better. There were times when it just went non-stop where we should have taken our time. I think we just got so excited with that crowd we lost focus at times.

LL: Were the refs a factor at all?

JM: When we go into a game we have three opponents: the other team, the refs and ourselves. Adversity is always hidden, and so we can’t be surprised when things don’t go perfectly.

LL: What were you thinking when your final shot went up to beat the buzzer?

JM: I was so disappointed. That was my second opportunity to shoot a buzzer beater this season, and I’m glad I had the chance to take them. But having it come as close as it did? Now that was too much.

LL: Anything you want to say to fans reading this article?

JM: Thanks for all the support. With that kind of environment, we all play better. Don’’t forget to come next Wednesday.

LL: Did you know how much talk there was about the game?

SO: I did actually. I had heard kids talking about it in my class, and saw ASB present it on CHSTV.

LL: How did you prepare your team for that kind of energy level?

SO: I just told them  to stay focused no matter what and that was all between the black lines.

LL: How did you think the silent game went?

SO: Perfect. When Rob hit that 10th point shot and the place went nuts; I’ve been coaching here for 13 years and that was the best crowd I have ever seen. It was fantastic.

LL: What did you think of the game itself?

SO: We should have never let it get that close. We had 24 turnovers that game and we have been averaging 11.

LL: Was the crowd and issue?

SO: I think the guys just got a little excited. Eventually when they get comfortable playing in that environment, then the crowd will be a huge advantage.

LL: What chances will the team have to play in that setting again?

SO: This Saturday the coaches have a meeting to set up the playoff brackets for CIF finals, and our first game will be next Wednesday.

LL: How will that pan out?

SO: Top 16 teams go, single elimination. If we beat LCC this weekend there is a chance we could get two home games.

LL: Who will be our biggest competition?

SO: Mission Hills, El Camino and Torrey Pines are the top seeds. We have already beaten El Camino this season. All we can do is play our game and see how it goes.

Without a doubt, the conclusion to this year’s basketball season will be one to remember. With the momentum from last Friday’s game on their side, it may simply a take a dose of Lancer Pride to push them into the finals. Next Wednesday the show begins, and we’ll need everyone in attendance.