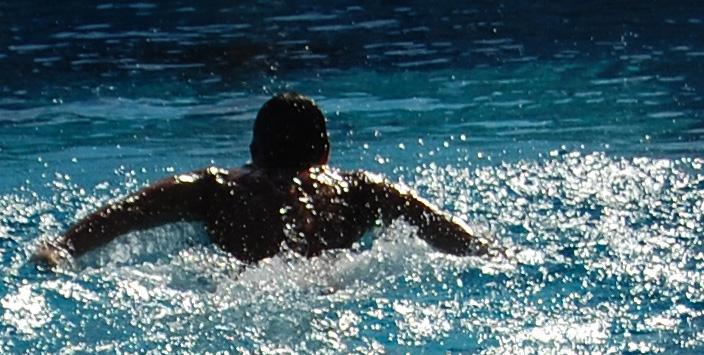 Despite ranking within the top 5 percent of Carlsbad’s graduating class, senior Ian Du still makes time to be an integral part of the boys varsity swim team. To him, swimming is more than just a sport-it’s a routine, a hobby and a lifestyle.

Like the majority of scholar athletes at Carlsbad, Du has come to realize the challenges of excelling at both school and sports. However, by competing in the 100 meter backstroke, 200 meter IM relay, and the 200 meter freestyle relay, Du has noticed swim’s benefits.

“Above all, swim helps me unwind after a long day of classes. It’s taught me discipline and that you can’t cut corners in life. You can’t skip out on the main sets just because they’re hard,” Du said. “You can’t just head to the showers early when you feel like giving up. This gives me motivation to do well in school”.

Du believes his abilities on the swim team have also helped him score an acceptance letter from UCLA-his number one choice for college. Even though his time on a competitive swim team comes to a close after this season, Du knows swim will still be in his future.

“I plan on going to UCLA and majoring in pre-medicine. It’ll be rigorous, yeah, but you know, getting in, swimming a few laps…it’ll clear my mind,” Du said. “In all seriousness, though, I’ve found that swim has helped me to relax. I know I’ll always have this outlet, so I’m thankful for that”.

With only a few home meets left before the season comes to a close, Du and his fellow teammates would love more crowd support. Lancers should go out and support the swim team this Tuesday, April 24 as they hope to gain a win against El Camino.