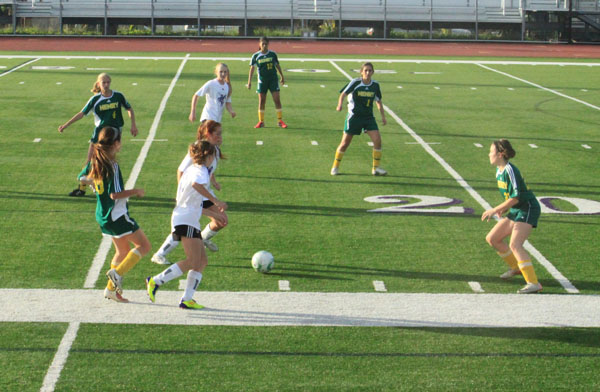 “We’ve improved on our communication and were working together,” sophomore Adrianna Ganguli said.

In the first quarter of the game, the girls tried hard and scored a few points. The ref called scoring two goals, the ref called a hand ball on the ladie lancers. Half way through first quarter, the coach brought in freshman Summer Mason who scored the third goal of the game.

Toward the end of first quarter, Patrick Henry scored one point. Freshman Christina Nixon blocked another potential shot for the Patriots. A great goalie kick kept the ball out of Carlsbad’s side and the Patriots at bay for the remainder of the quarter.

Coach Donovan Martinenz talked to the girls during half time and brought the energy back up for the second half of the game.  The team gave each other motivation any player could relate to.

“We all have a passion for soccer and like beating other teams,” Mason said.

The second quarter began poorly when the many attempts to score went to the Patrick Henry goalie. However, sophomore Carly Ono and freshman Morgan Saucerman kept the Patriots from scoring despite their attempts. Ono and Saucerman both showed great defense throughout the game.

Further into the second quarter, sophomore Victoria Soto scored and freshman Hannah Miller followed. After a shot went to Patrick Henry’s goalie, Miller quickly reacted to the goalie’s fumble scoring another point. Miller and Soto, both forwards, played well together throughout the second half.

In the last 10 minutes of the game, Lancers scored the final goal winning 8-1.

“Today we played well for the majority. They lost focus for a little bit but came back. Overall, I was pleased with the way they played,” Coach Martinez said.

The Lancers are excited to play upcoming schools and connecting as a team.

“Were all starting to come together and so it’s easier to play together,” Ganguli said.