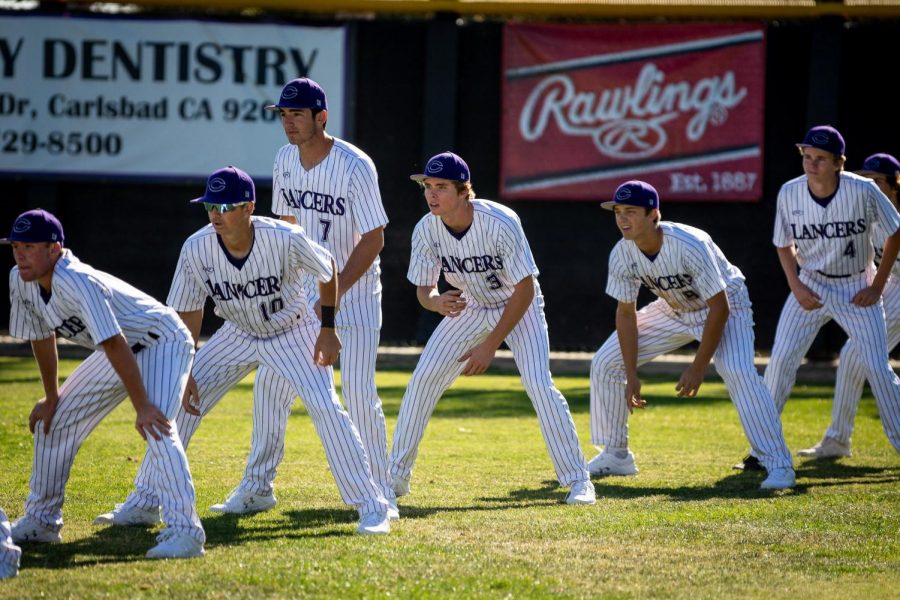 Varsity baseball does sprints before a game. Photo courtesy of coach Jake Savicki.

On Thursday, March 12, Carlsbad Unified School District (CUSD) announced that all athletics were to be canceled through at least the end of March to prevent the spread of coronavirus (COVID-19). For varsity baseball players, this means an abrupt halt to a promising season.

Before the break caused by coronavirus, varsity baseball had a 6-1 record and was ranked fourth in San Diego with roughly 25 games left on the schedule. In lieu of these opportunities to show off their skills to colleges, players will have to self-promote and send in videos in hopes of recruitment.

“For pitchers, they’re always one good outing away from getting on a college’s radar,” coach Jake Savicki said. “So for all of them, it’s tough.”

As of March 17, CIF has declined to decide whether or not to cancel the spring sports season entirely. The postponement of the season rests as an unfortunate situation for many players, especially seniors who may not see their hopes for their final year of high school baseball fulfilled.

“I thought it would be more fun,” senior Thomas Saggese said. “I thought that I would get to do all the things I want to do, including finishing out my senior season.”

For players that are not seniors, the postponement of the season still seems to rob them of opportunities to become better players and see their hard work and practice translate into success.

“It was unfortunate because we had been working hard all year to prepare for the season and we only got to play seven games,” junior Sam Hasegawa said. “We have a hard schedule so by playing good teams I would develop as a player, but now we are missing part of the season.”

Despite these disappointments, players generally agree with the district’s cancellations for public health reasons. For Savicki, this postponement rests as an important time for leaders to show athletes how lives outweigh the importance of sports.

“I think they are taking precautions to protect the health of everyone,” Hasegawa said. “I think it is important that it doesn’t spread to more people.”

CIF mandated a “no contact” period that prohibits coaches from seeing, working, training or communicating with players over this break. However, that has not stopped players from continuing to work on their athletic skills individually.

“I’m gonna use this time to get faster and stronger,” Saggese said. “I have an at-home gym and a tee in my backyard so I’m able to stay busy and train hard.”

While these cancellations certainly bring challenges, one silver lining rests in the learning experiences that players can gain from this time.

“It will serve as a good life lesson that things will happen to us that we have no control of, but the attitude in which we approach the future is fully in our control,” Savicki said. “A very important life lesson for these guys before they graduate, and one that you can’t necessarily teach in a classroom.”